Recently, John Wegg, the renowned publisher of Airways, contributed a series of previously-unpublished Norseman photos. Here are several along with two from the collection of the great Norseman aficionado, Ross Lennox.

Having begun with CPA late in 1945, Norseman V CF-BHU later served Territories Air Service and Associated Airways 1949-55, then it moved to PWA, where it is shown in a typical winter setting. CF-BHU ended with Ontario Central Airlines of Kenora. On June 19, 1974 it crashed disastrously at Sachigo Lake, an Indian reservation in far Northwestern Ontario. Date, place and photographer are unknown for most of these photos. Suffice to say that, over the decades, John added these to his monumental collection, mainly as original negatives.

An early Norseman, CF-DFU began as RCAF 2458 in October 1940. After a gruelling war with the BCATP, in 1946 it became CF-DFU with Saskatchewan Government Airways. It changed colours, going to Queen Charlotte Airlines in 1956, then to PWA and B.C. Airlines. It was lost in a crash on March 28, 1961. Here CF-DFU sits dormant at Vancouver.

An ideal side-on view of Norseman V CF-BHY bearing the logo of Tommy Wheeler’s Gray Rocks Air Service. So pristine is this view than I suspect it was taken at Noorduyn soon after ‘BHY rolled off the production line. Gray Rocks accepted ‘BHY in July 1945 and continued operating it until it was wrecked landing at the railway and forestry centre of Oskelaneo in northern Quebec on December 18, 1959. ‘BHY previously had eluded me, so is not found in either Norseman volume.’

This view CF-BTC is a real work-a-day snapshot. Ex-RCAF 2456, ‘BTC is well covered in Norseman Vol.2. Here it sits forlornly out in the cold at Winnipeg’s Stevenson Field during its Central Northern Airways era. ‘BTC served CNA/Transair 1948 – 58, then flew with Pete Lazarenko’s Northland Fish Co., Willy Laserich and others until 1998, when it joined the Western Canada Aviation Museum in Winnipeg.

Another of the countless Norseman photos taken over the decades at the town dock in Kenora. OCA’s yellow-and-red CF-HQD awaits its next trip on a fine summer day. Ex-US Army 43-5357, it served in Alaska during the war, then was NC88760 in Minnesota before coming to Canada in 1954 for Warren Plummer of Sioux Narrows. After a later stint with Chukuni Airways of Kenora, it went to OCA in 1960, then joined Slate Falls Airways of Sioux Lookout. In 2014 ‘HQD was one of many Norsemans classified as “projects”, meaning that some day it might be restored for museum or flying purposes. It’s stored at Kakabeka Falls near Thunder Bay. 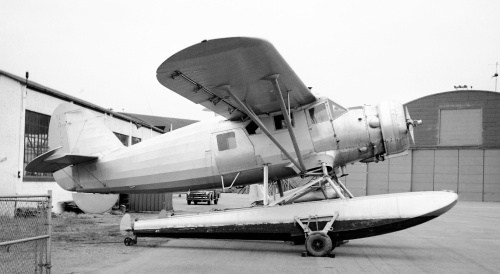 N41201 at an unknown US location. Someone had metalized the doors — a noteworthy mod so early in the postwar era. At present there is not much of a paper trail for this aircraft, other than that it had been US Army UC-64 45-41751, the 835th Norseman built.

Norseman N58691 in US Forest Service markings at Long Beach, California in October 1954. It has some sort of a belly mod. Perhaps a tray for doing forestry seeding or spreading fertilizer or insecticide? No one seems to know what became of this Norseman, but in 2014 its registration belonged to an amphibious Cessna 182.

Another UC-64, NC60671 was acquired in 1945 in South Carolina from the  Reconstruction Finance Corp., the US bureau tasked with disposing of thousands of such war surplus military planes. It operated in Montana briefly, then was sold in 1951 for $4800 to Lamb Airways of The Pas, becoming CF-GUQ. On May 10, 1955, Jack Lamb was taking off in ‘GUQ at The Pas, when everything suddenly fell apart for him. Unbeknownst to Jack, ‘GUQ had taken on a heavy load of water taxiing through the rough water that day. Jack got airborne, but ‘GUQ suddenly stalled, crashed and exploded. Within moments Jack’s dad, Tom, and his brothers, Don and Doug had hauled him and his passenger out. Badly burned, Jack spent months in recovery. This story and many other adventures are related in Jack’s wonderful book, My Life in the North. In From Tractor Train to Bush Plane, Jack’s brother, Conrad, also covers many stories of the Lamb family and their legendary air operations. 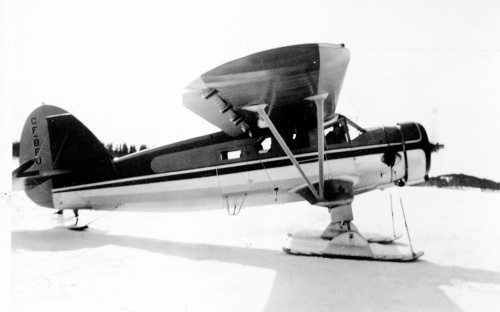 The renowned Norseman CF-BFU during Hudson Bay Air Transport days at Flin Flon. From here in the late 1940s Ross Lennox flew ‘BFU throughout Northern Manitoba, the Northwest Territories and Yukon. Eventually replaced by a new Otter, in 1958 ‘BFU went to Warren Plummer of Sioux Narrows., and later served other operators. In 1971 it was wrecked on landing at Selkirk, Manitoba. 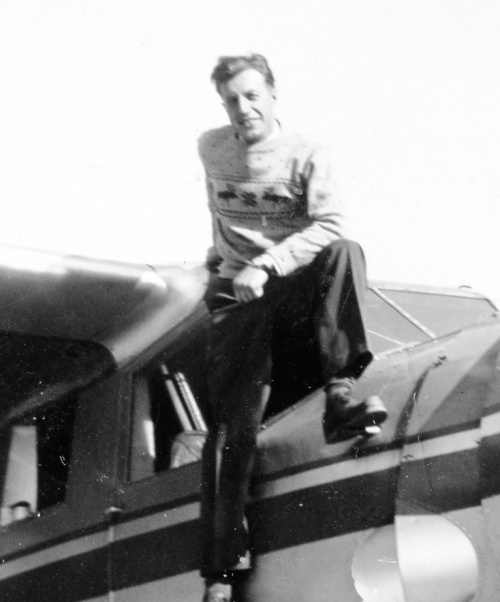 Ross Lennox got to know CF-BFT and CF-BFU inside out. He later was world famous in the helicopter industry. He finished his main flying career at Pratt & Whitney Canada, where he was chief pilot. Ross’ exploits are recounted in such books as Air Transport in Canada, The Noorduyn Norseman, Vol.2 and Power: The Pratt & Whitney Canada Story. Ross passed away in November 2013.