Note … This book no longer available at CANAV. If you wish a copy see what you can find at such websites as http://www.abebooks.com … When I launched The Canadair North Star in 1982, I mentioned that I hoped to publish a book about the Canadair Argus and Yukon. I carried on to produce The De Havilland Canada Story the following year, then 30+other books, including Sixty Years, Canada’s Air Force at War and Peace (Vol. 3) and Canadair: The First 50 Years each with some decent Argus content. But I failed in the end to do the Argus book.

Here are a few Argus photos (not shown in the book) that I took in years gone by. To begin, check out the shadow of 407 Sqn Argus 20718 as we scorched low over Eagle River crossing in the Yukon during a NORPAT (Northern Patrol) of March 22, 1977. The crew had me along as a freeloader that week. Needless to say, a great time was had be all.

In the end some ex-RCAF Argus folks got themselves organized “committee-wise” to gather enough material to turn out The Canadair Argus: The Untold Story of Canada’s Cold War Maritime Hunter. And a fair effort it is — all things considered (lots of anecdotes, tons of photos, etc.). The book gives some basic background about RCAF Maritime Air Command in its early postwar days, when the Lancaster and Neptune “held the fort” against a formidable Soviet submarine fleet. As the Cold War heated, a more capable anti-submarine plane was needed and that gave rise to the Argus. 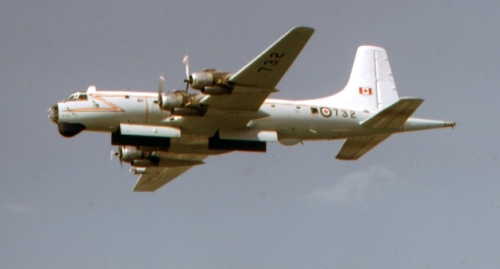 August 29, 1968 and Argus 20732 flies through its maritime patrol demo over the Toronto waterfront during the Canadian International Airshow.

There follows the story in good detail of this grand RCAF legend in service with the Argus Conversion Unit, 404, 405, 407, 415 and 449 squadrons, on test and evaluation tasks, etc. Amazing stuff about training & tactics, weapons and the previously secret guts of the operation. Through the 1960s-70s the Soviet submarine service knew it would take a beating if push came to shove in the cat-and-mouse game that went on 24-365 on Canada’s coasts. The Argus would ensure that. 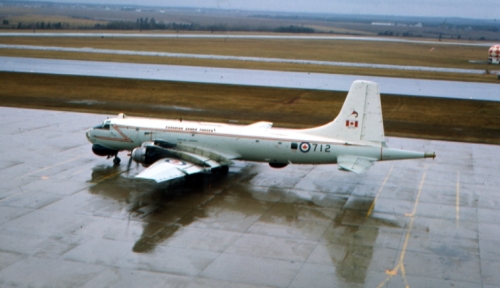 Besides the ASW game, the book mentions Argus squadrons on such special taskings as the Cuban Missile Crisis. Also “Fincastle — the Commonwealth ASW championship exercise, where the Argus always shone. Search and rescue, Arctic patrols and mishaps also are covered.

The “committee” part of the book comes through with the lack of so much as a table of contents, let alone an index (forget about a bibliography, eh!). As for typos? Well, they are always a real bugger to chase down. We scramble like mad at CANAV to put out a clean book and haven’t yet succeeded to perfection. However, the Argus committee don’t appear to have bothered at all with copy editing, and don’t seem to realize that there is such a thing as photo-shopping to clean all dust, etc. from a photo. From what I can see, they went 90% – 95% of the distance, then pooped out. Oh well … if you’re an RCAF bibliophile, you still need this one. So says ye olde scribe.

NB … The Argus book is no longer carried by CANAV. See such used book sites as http://www.abebooks.com or http://www.bookfinder.com where you might find a used copy.

Right behind the Argus book … here comes Night Fighters: Stories from the Flyers of Canada’s All-Weather Fighter Force, Canada and Europe 1953 to 1984. Compiled by an all-weather committee headed by John Eggenberger, Bob Merrick, and Doug Munro, this new title focuses on CF-100 and CF-101 days.

Very cleanly done, very much worth the price of admission, Night Fighters is packed with “True stories told by those who watched over Canada’s and NATO’s airspace during the crucial years of the Cold War. Whether scrambling to intercept a Bear, taking part in realistic exercises to maintain their combat readiness, flying in the daily training adventures, or thrilling airshow crowds with thunderous formation displays, these flyers were constantly honing their arcane skills.” 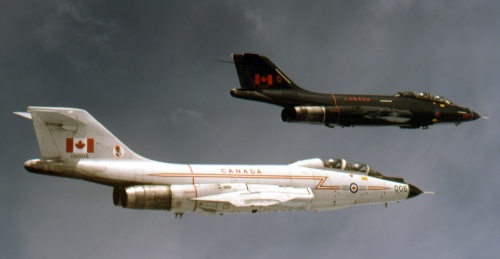 No longer sold by CANAV Books