Aviation in Canada: Evolution of an Air Force Vol. 3

Fans of the International Air Show, and aviation buffs in general, will find the newest book in Larry Milberry’s Aviation in Canada series fascinating reading. Titled Evolution of an Air Force this profusely illustrated hardcover volume records the history of the Canadian Air Force and Royal Canadian Air Force (the “Royal” preface added in 1924) during the two world wars as well as the part the RCAF played on the “home front” during the uneasy and frequently disheartening 1939-1945 era. 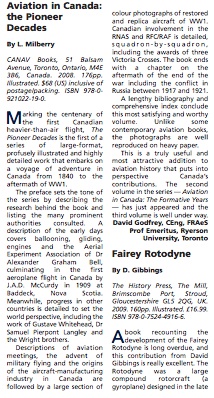