Birdman: The Wright Brothers, Glenn Curtiss and the Battle to Control the Skies

This fantastic best seller is one that will satisfy any serious fan of aviation history. Beginning with such pioneers of flight as Otto Lilienthal in Germany and Octave Chanute in the US, Goldman quickly comes to the Wright brothers of Dayton, Ohio and Glenn Curtiss of Hammondsport, New York. Showing how Lilienthal and Chanute influenced these three innovators, he then details how each persevered in flying America’s first powered airplanes.

This book is downright exciting – a “page-turner”, as they say. The author delves deeply into each participant’s human side, warts and all. Often these heroic figures are at loggerheads – the Wrights clash with each other, let alone with Curtiss, whom they accuse of stealing their patents. They strive to virtually patent the airplane. Their battles rage for years in the courts.

Leading the way in powered airplane flight, the Wrights engender a whole new world of entertainment – exhibition flying. From 1909-14 they and Curtiss bring their performing troupes to city after city all the way west to Los Angeles and Seattle. This is a magnificent era, but it comes at a huge cost. The touring flyers introduce millions to the airplane and make piles of money. But by 1912 more than 100 have lost their lives, mainly at public appearances. Airplanes fall apart in flight, turbulence hurls pilots from their seats, planes crash into crowded bleachers, the first bird strike kills a famous pilot, etc. All along the crowds are loving it all. The great Lincoln Beachey, who performed some of the earliest airshows in Canada, grows disgusted at how the hordes come out mainly to see him die. And so they finally do in 1915, when his plane disintegrates during a show at the great San Francisco exposition.

Another major theme is the years-long lawsuits pursued almost insanely by the Wrights against all other aeronautical enterprizers. Obsessed by their patents and paranoid about these being infringed upon, the Wrights spent a fortune in the courts. While aeronautics was progressing at Hammondsport, in the UK and across Europe, the Wrights dithered and lost their chance. Their Wright Flyers, in the meantime, became known as death traps. Dozens of airmen and passengers died in Wright Flyer crashes, while Curtiss machines gained the opposite reputation. In the end, Goldman concludes that the Wrights held up America in its quest to advance in aviation. Curtiss on one hand and Europe on the other set the pace in advancing aviation’s cause. Ironically, in the end the two warring sides made peace through a 1929 corporate alignment creating the Curtiss-Wright Co., which survives to this day.

Don’t miss this exceptional book that brings to life the great years of powered flight!

Birdman: The Wright Brothers, Glenn Curtiss and the Battle to Control the Skies 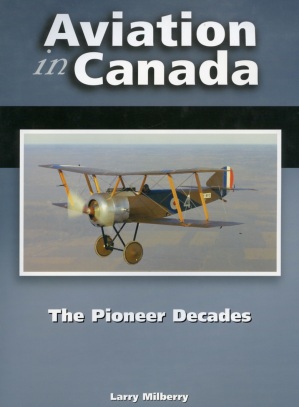 Aviation in Canada: The Pioneer Decades

Complementing Birdmen is this detailed history of the early years of flight in Canada. Beginning with Canada’s first flight – a balloon ascent in Saint John, New Brunswick in 1840, The Pioneer Decades explains how aviation went decade by decade in America’s next-door neighbour. Ballooning alone was a huge public fascination that produced one Canadian “first” after another, whether the Saint John ascent, the “first” aerial crossing between Canada and the US, the first powered airship appearances or the first parachute jump.

The Pioneer Decades then introduces heavier–than-air flight with teenager Larry Lesh’s daring glider experiments in Montreal in 1907. While Birdmen does tell a bit about Alexander Graham Bell and the Aerial Experiment Association, The Pioneer Decades covers the AEA program in detail, ending with the dramatic first powered airplane flight by the “Silver Dart” at Baddeck in 1909. There also is much of Glenn Curtiss and Hammondsport, where the “Silver Dart” was built and first flew.

The Pioneer Decades continues with the great years in Canada of the exhibition flyers, nearly all of whom are also covered in Birdmen. For example, Toronto’s first airplane flight is made by Charles Willard – a Curtiss-trained pilot flying his Curtiss-made “Golden Flyer”. The great Montreal and Toronto air meets of 1910 and 1911 are also here, with tales of the famed Curtiss and Wright pilots, many of whom would give their lives in the cause from 1907 onward – Lincoln Beachey, Cromwell Dixon, Eugene Ely, Ralph Johnstone, Phil Parmalee, etc.

The Pioneer Decades tells how McCurdy and Baldwin of the AEA tried selling their designs to the Canadian military, how Canada’s first WWI airmen trained at Curtiss and Wright schools, then how they excelled “Over the Front” in the first great aerial conflict. Many would fly the great Curtiss JN-4 and Curtiss’ renowned long-range, anti-submarine flying boats, about which, a few years earlier, the Wright camp had been scoffing. You’re bound to enjoy this beautifully-produced CANAV title.

Aviation in Canada: The Pioneer Decades