In addition to our new Norseman selection, John Wegg also provides these fantastic DH/DHC photos, ranging from Rapide to Comet. All of these build beautifully on the foundations provided by CANAV’s widely-acclaimed De Havilland in Canada and The Noorduyn Norseman. Nice, eh!

Below, three new views of Canada’s last flying D.H.80 Puss Moth — CF-AVC. Brought to Canada in 1935, ‘AVC served various private owners. In 1965 it was sold in the UK, becoming G-FAVC. Here it is some time in the 1950s in period colours – dark blue fuselage with orange wings and tail. When photographed in the UK in the 2010s it still bore these colours. 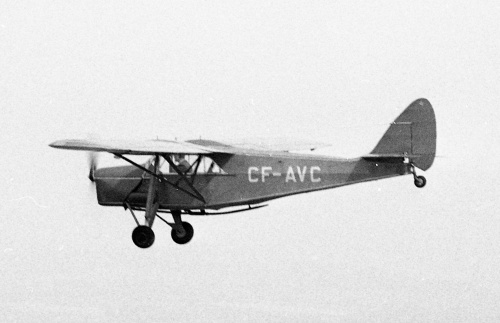 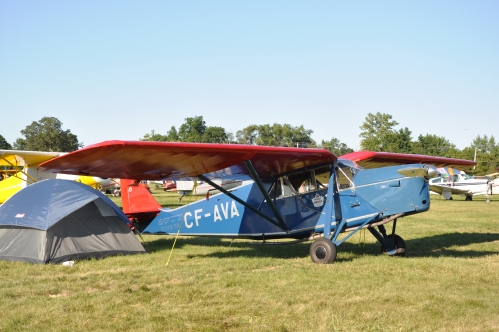 I had no idea that there was a second Canadian Puss Moth still around. Here it is — CF-AVA aka N223EC — photographed by CAHS Ottawa chapter president Timothy Dubé in the vintage aircraft camping area at Oshkosh on August 2, 2013. Sold originally by DHC in 1934 to Consolidated Mining and Smelting of Trail, BC, there were subsequent BC owners in 1936 – 42, then the plane “disappeared”. The next record that I’ve spotted is of a 1962 sale to Ed Carlson of Spokane. On August 1, 2014 Vancouver Island aviation buff, Dave Fletcher, provided us with an update: “CF-AVA passed through Courtenay Airpark this week. Interestingly, the US register shows it as ‘amateur built’, so I don’t know if it is the original, or, a superb replica.”

Ex-RCN Tiger Moth CF-IVO when owned by Rev. John MacGillivray, an early member of the Canadian Aviation Historical Society. Painted navy blue and white, it’s seen at an EAA fly-in at Rockford, Illinois. John attended his first Rockford event in 1959, flying ‘IVO all the way from Summerside, PEI. Following the 1964 fly-in, John donated ‘IVO to the budding EAA museum, where you may see it today. Before the handover John made a final flight at Rockford, his passenger being the great aviation historian, EAA pioneer and photographer, Pete Bowers. 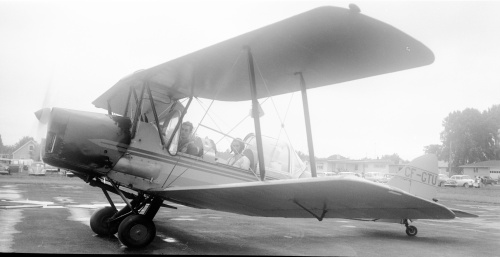 CF-GTU at Rockford circa 1960, when owned by Adriaan Cappon of Sarnia, Ontario. Last heard of, this ex-RCAF Tiger Moth was with Classic Wings of Courtice, Ontario. 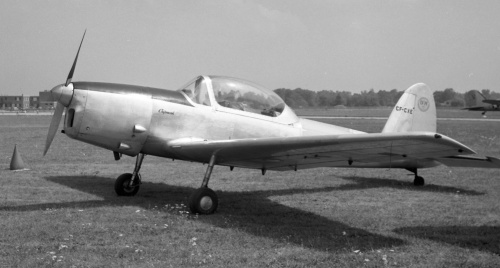 In 1946 de Havilland Canada introduced the DHC-1 Chipmunk as its natural post-WWII Tiger Moth replacement. CF-CXE was shot at Rockford circa 1960. Last heard of in the 2000s it was N143P in Salem, Oregon. 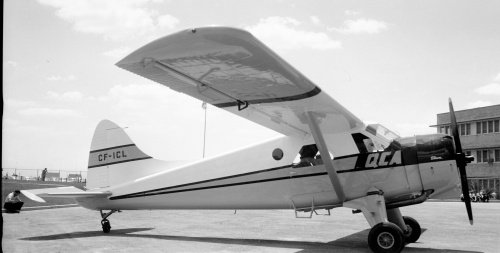 Beaver CF-ICL at Vancouver soon after being delivered new in 1955 to Queen Charlotte Airlines. After countless bush, coast and mountain flying experiences, in the 2000s this long-lived Beaver was N67DL — beautifully restored and based in Everett, Washington. 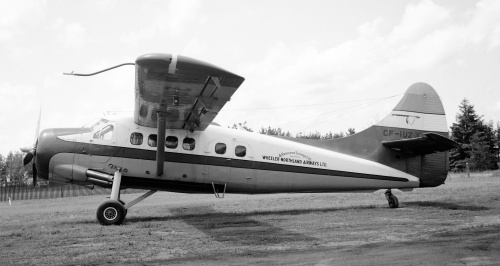 Built in 1956, Wheeler-Northland Otter CF-IUZ-X did “aeromag” survey work in the 1960s. In 2014 it was a Turbo Otter based in Vancouver with Harbour Air. Much can be learned of any such DHC plane by fishing around on the internet. The diehard fans, of course, always have De Havilland in Canada to consult!

There always were other interesting de Havilland types to photograph in postwar Canada. DHC at Downsview usually marketed and serviced these – anything from the D.H. Dove and Heron to the RCAF’s D.H. Vampire fighters and Comet jetliners. The Heron always caught any photographer’s eye. Three of these attractive mini-airliners had long and useful Canadian careers: CF-EYX with the Department of Transport (usually based in Moncton) CF-HLI with Canadian Comstock (based in the Genaire hangar at Malton) and CF-IJR based at Downsview with DHC. Here is the DOT’s fixed-gear Heron CF-EYX. In 1970 it disappeared into Honduras.

RCAF Vampires in a nice flightline scene, location unknown. The natty Vampire served frontline and reserve squadrons from 1948 to 1956, by when the last had been replaced by Sabres. Once retired, 17068 was sold “south of the border” 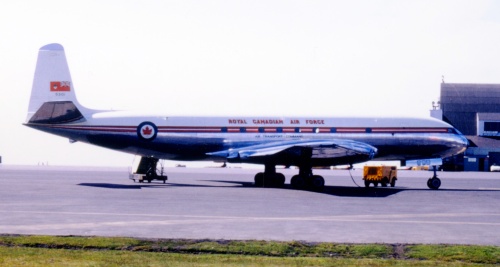 An ancient scene at Keflavik featuring RCAF Comet I 5301 on the tarmac. Such early jet transports did not travel far on North Atlantic routes before having to refuel. Depending on winds, if westbound from Prestwick or Shannon, an RCAF Comet almost certainly had to stop at Keflavik, maybe also at Frobisher Bay or Goose Bay, before reaching home base in Ottawa. The RCAF was the world’s first air carrier with scheduled trans-Atlantic jetliner service. The story of its Comets is covered in such CANAV titles as Air Transport in Canada and Sixty Years. Thanks for all these beauties, John! 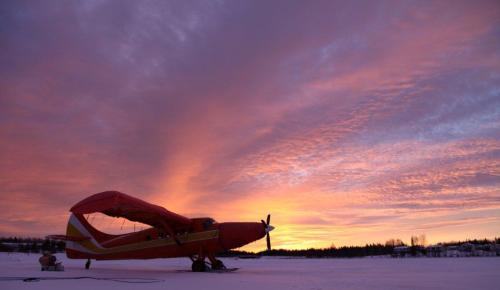 On January 11, 2013 Richard Hulina of Slate Fall Airways captured sunrise on the ice at Pelican Lake, Sioux Lookout. In the foreground is one of Richard’s turbine Otter workhorses on wheel-skis, ready for a day’s work. Read the feature about Richard’s amazing book, “Bush Flying Captured”.