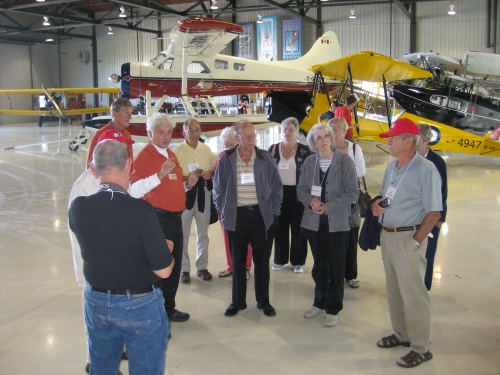 Jay Hunt (orange shirt) of Vintage Wings has the attention of a crowd of 440 CF-100 era guests during the squadron reunion. A Finch, Beaver, Tiger Moth and Fox Moth form the backdrop. (Photos by Larry Milberry unless noted).

One of the RCAF‘s renowned combat squadrons of WWII and Cold War days was 440, which had its beginnings as 11 (Army Co-operation) Squadron in Vancouver in October 1932. Initially without airplanes, the squadron didn’t get airborne until delivery of its first D.H.60 Moths in October 1934. It carried on with training through the Thirties to the eve of war, when it received its first combat types — the Atlas and Lysander. On June 29, 1940 F/L W.J. McFarlane flew 11 AC’s first wartime operation — a patrol in Lysander 428 scouting for a reported Japanese submarine from RCAF Station Patricia Bay, near Victoria. 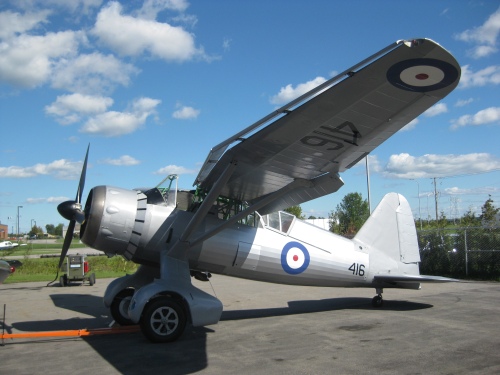 440 Sqn grew out of 11 (AC) Sqn, which formed in 1932. One of the squadron's first combat types (1939) was the Westland Lysander, still a frontline plane at the time. This fine "Lizzie" greeted the 440 old timers for their visit to Vintage Wings.

11 (AC) Sqn disbanded on February 1, 1941. Its successor, 111 (Fighter) Sqn, formed the following November 3 at Rockcliffe under S/L A.D. Nesbitt, DFC, a Battle of Britain veteran. Equipped with Kittyhawks, 111 went to the Pacific far northwest to bolster defences against the Japanese, who had occupied the Aleutian Islands. 111 flew its first “ops” on September 25, 1942, when four of its Kittyhawks escorted USAAC B-24s bombing Japanese positions at Kiska. On this mission S/L K.A. Boomer, 111’s CO, shot down a Japanese fighter — the first and only RCAF kill in this theatre. 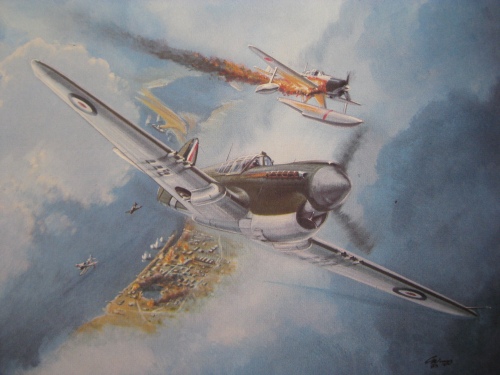 111 withdrew from Alaska in August 1943 to resume operations at Patricia Bay. It disbanded in January 1944, then proceeded overseas, where it formed anew, this time as 440 Squadron at Ayr, Scotland. It briefly flew Hurricanes, then converted to the mighty Typhoon. Along with 438 and 439, 440 was one of three RCAF Typhoon squadrons comprising 143 (RCAF) Wing, part of RAF 2nd Tactical Air Force. 440 soon moved south to Hurn to begin tactical operations against German targets in France in the lead-up to D-Day. 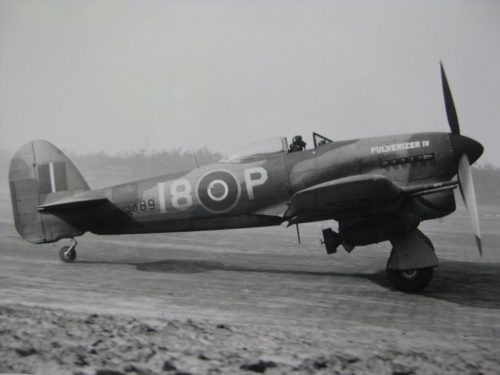 A 440 Squadron Typhoon taxies on operations at Eindhoven, Holland over the spring of 1945. Minutes later it would have been delivering its two 1000-lb bombs. Typhoon I8-P/RD389 was Harry Hardy's last Tiffie of the war -- he christened it "Pulverizer IV". Harry attended this reunion. (RCAF)

440 Squadron flew to the Normandy Beachhead at B.9 Lantheuil on June 28, 1944. Moving frequently hereafter, it operated non-stop to war’s end, busy days seeing each of its dozen or so “Tiffies” flying 4, 5, 6 or more sorties daily. Many aircraft fell to German flak and far too many 440 pilots were lost. The squadron disbanded at B.166 Flensburg on August 26, 1945. Its record included 4213 operational sorties with 2215 tons of bombs dropped. These efforts resulted in 420 rail cuts and hundreds of enemy troops, vehicles, barges, etc. blasted. The brutal cost? 32 Typhoons lost, 28 pilots killed. Five 440 pilots received the DFC for their good efforts. The details of this amazing RCAF era are best read in Hugh A. Halliday’s 1992 book, Typhoon and Tempest: The Canadian Story, which anyone with an interest in 440 will want. 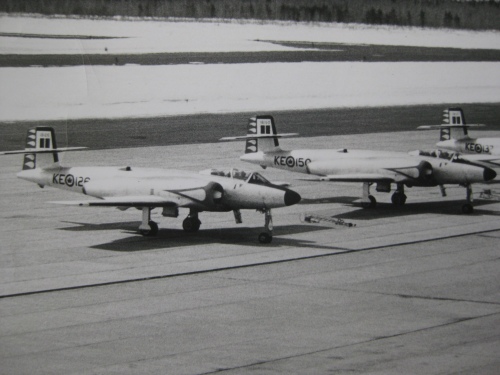 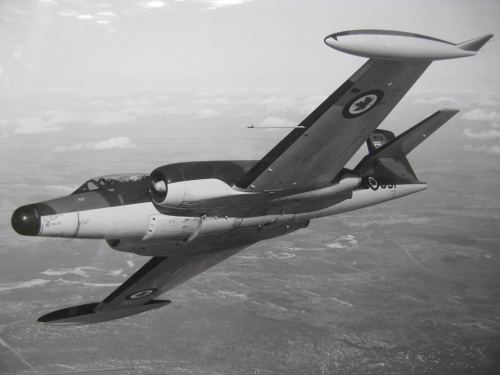 With the Cold War, 440 re-formed in October 1953. Stationed initially at Bagotville with the machine-gun armed CF-100 Mk.III, in February 1955 it re-equipped with the Mk.4B, which added air-to-air rockets to the arsenal. In May 1957, 440 flew that Atlantic to take up residence at RCAF 3 Wing at Zweibrucken, West Germany. There it bolstered NATO’s all-weather fighter bastion against the Warsaw Pact forces. The squadron again disbanded in December 1962. 440s CF-100 era is covered in good detail in Larry Milberry’s 1981 book The Avro CF-100. This classic title is out-of-print, but copies can be found on such used book internet sites as abebooks.com or bookfinder.com. Another essential book is 440 Squadron History published in 1983 by The Hangar Bookshelf. 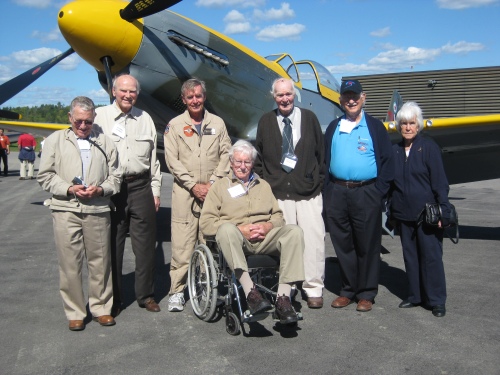 This illustrious squadron again re-surfaced in 1968, this time as a transport, and search and rescue unit operating the H-21, Dakota, Buffalo and Twin Otter over the decades. 440 still does good work with Twin Otters from its home in Yellowknife. 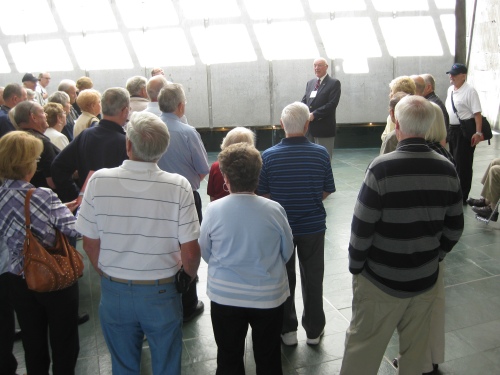 The 440 gang is briefed by Paul Manson at the start of their tour of the impressive new Canadian War Museum. 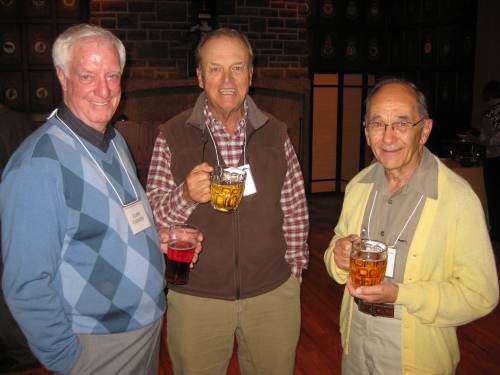 CF-100 era 440 aircrew Cliff Cassidy (All-weather interception navigator), Bob Hyndman (pilot) and Clive Loader (pilot). Clive had joined the RCAF in the 1950s following an RAF career flying such fighters as the Hunter. This weekend Cliff briefed the reunion about plans to permanently display the 440 Sqn crest in the Royal Air Force Club in London. On the spot this evening half the money needed to get this done was raised.

September 9 to 12, 2010 former squadron members gathered in Ottawa for what was one of the great RCAF squadron reunions. The 80 or so attendees included Typhoon pilots plus CF-100 pilots and navigators and their ladies. Excellent sessions were organized in some of Ottawa’s best military messes, the RCAF Gloucester Mess included. Half a day was spent at Vintage Wings in Gatineau, where we enjoyed informative guided tours in small groups. The icing on this cake was a wonderful air display put on by Michael Potter in his pristine P-51 Mustang. 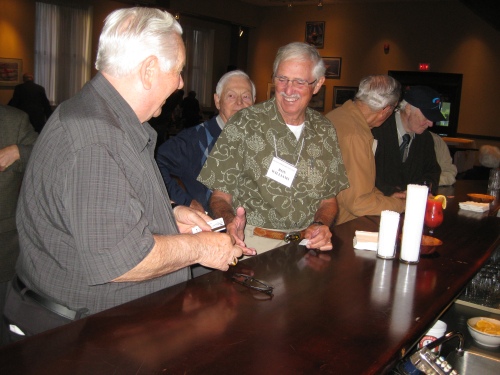 CF-100 AI navs, Lonnie Maudsley and Ron Williams, meet at the bar of the Navy Mess in Ottawa. Their squadron mate Ron Leather (pilot) looks on. At the end of the bar Gord Smith (CF-100 pilot) chats with Ted Smith (Typhoons).

An afternoon was spent at the Canadian War Museum, where the new establishment’s first CEO, Gen Paul Manson, was our chief tour guide. Paul had flown CF-100s with 440, later flew CF-104s, then rose to be Canada’s Chief of the Defence Staff. The reunion finished on another high note — a send-off breakfast back at the Gloucester Mess, from where everyone dispersed until next time.

Duane Sharpe as he was checking out some other memorabilia. His photo as a young CF-100 AI navigator is on the cover of Canada's Air Force at War and Peace, Vol.3. 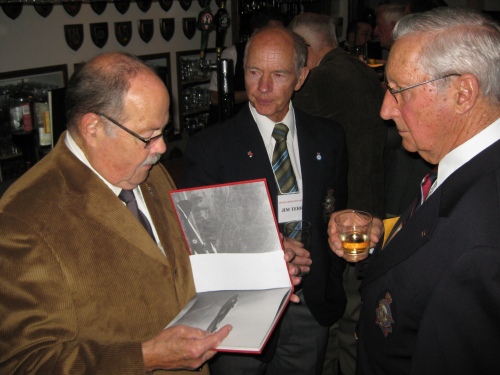