When we start some new research project, all sorts of material of peripheral interest to one’s new work will surface. So it is happening as I begin preparing for what will be CANAV’s 2024 blockbuster 100 th Anniversary the RCAF (if you have our Sixty Years book, you’ll know what to expect). Just this week a lot of Norseman photos popped up “out of nowhere”, so I can’t let this go by. Before these got re-buried in some filing cabinet or dark corner, I fingered them for blog use. So … let’s have a look.

USAF — What’s its Future in the Arctic? Also see https://www.defense.gov/Explore/News/Article/Article/2281961/air-force-reveals-cold-facts-on-new-arctic-strategy/source/GovDelivery/

S/L Logan being particularly capable, the site that he recommended as a possible landing area at Pond Inlet actually did (post WWII) become the hamlet’s airport. So it remains to this day. The 1927-28 Hudson Strait Expedition added greatly to the RCAF’s knowledge of this vast, forbidding region (see Aviation in Canada: Evolution of an Air Force, The Creation of a National Air Force, Canada’s Flying Heritage, etc). With WWII, much more was learned, starting with an expedition using two RCAF Norsemans, something that led to the establishment (by the US military) of important airports from Churchill and Ungava to Baffin Island and Greenland. This network arose from the need to ferry airplanes from North American factories to the UK for the war effort. Subsequently, in the 1950s the Cold War saw many new Arctic bases established under the DEW Line project. By 2020, this nearly century-old evolution sees aviation as the glue holding together Canada’s Arctic real estate.

Meanwhile, from the 1950s the RCAF was operating frequent (usually monthly) Northern patrols (NORPATs) using the Lancaster, Argus and Aurora. In 1977 I was on one of these with 407 Sqn. We flew two patrols that week in an Argus from Cold Lake. Each mission was packed with objectives. What else should an Arctic nation be doing, right? Much on-the-spot info was gathered on NORPATs, then Ottawa cut the budget and patrols became fewer and fewer. In more modern times (1980s) came the establishment of very expensive Arctic FOLs (forward operating locations) for Canada’s CF-18s. These were built at Rankin Inlet, Yellowknife, Inuvik and Iqaluit. However, Canada’s commitment to such bases and other serious Arctic defence measures has been fading (the FOLs were left to deteriorate even before the USSR collapsed).

Much Arctic hoopla has been displayed in recent years by PMs Harper and Trudeau taking glitzy summer swans across the north, promising huge development, even a deep water port. These swans were little more than expensive photo and political campaigning ops. Any tangible Arctic development has been hard to measure. Meanwhile, the USA, Russia and China all are very seriously focused on the Arctic. Does Canada intend to get back into this high-stakes game, or will Ottawa sit on its hands and let our Arctic prerogatives wither? These two recent news items (the first published at “Breaking Defense”) puts the spotlight on what the USAF is contemplating for the Arctic. Is Ottawa even clued in about this? As we sit here, the only RCAF aircraft based in the Arctic remain 3 or 4 ancient Twin Otters (440 Sqn) that have been flying from Yellowknife for decades. These support our famous Canadian Rangers, but also (and infamously) have been used to take VIP flunkies from Ottawas on exotic summer fishing trips. This is not what we can call a serious Arctic commitment to Canada’s air defence/sovereignty. See what you think of these USAF papers where Canada barely gets a mention:

“Historically the Arctic, like space, was characterized as a predominantly peaceful domain,” the Air Force Secretary Barbara Barrett said. “This is changing.” 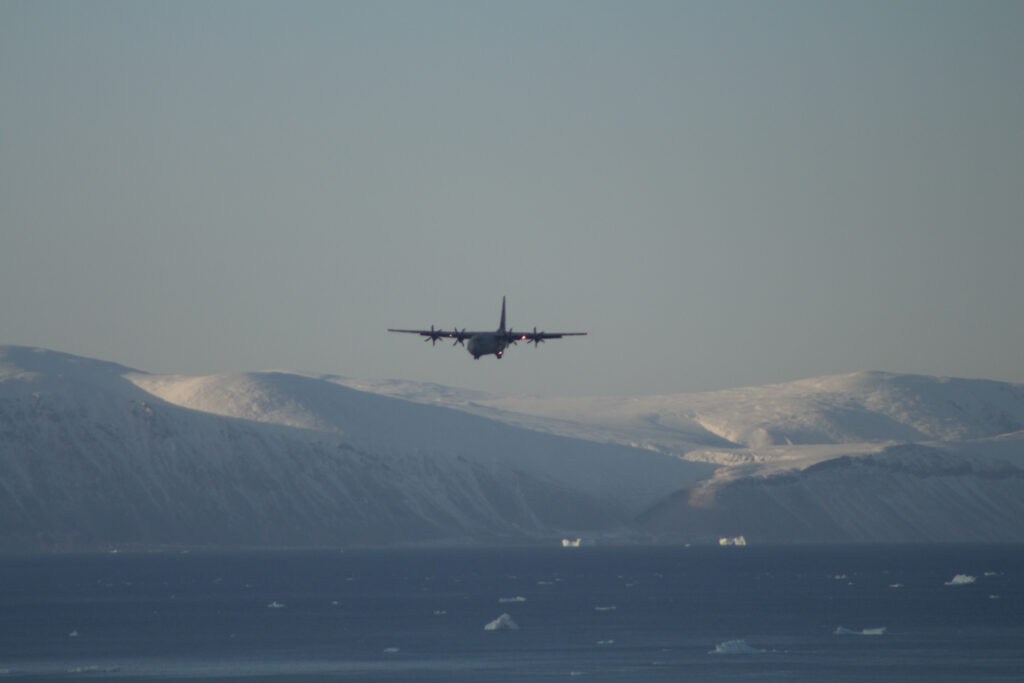 WASHINGTON: As part of its new Arctic Strategy released today, the Air Force is eyeing how to modernize mobility aircraft capable of polar operations, improve existing bases, and expand allied cooperation as it gears up to face increased challenges in the region from Russia and China — as well as the changing environment.

The new Air Force strategy document, which follows from Department of Defense’s 2019 Arctic strategy, touts the service’s extensive northern network of airbases and radar stations. The study even says that the service is responsible for “close to 80% of DoD resourcing to the Arctic region.”

Now, that surprising figure is sourced to a single DoD paper from 2016, and the Navy submarine force, which regularly sails under the ice and holds an annual ICEX, might challenge that contention. As Breaking Defense readers are well aware, the Navy has been ramping up efforts in the Arctic over the past year, and new Navy Secretary Kenneth Braithwaite is a former ambassador to key regional ally Norway. 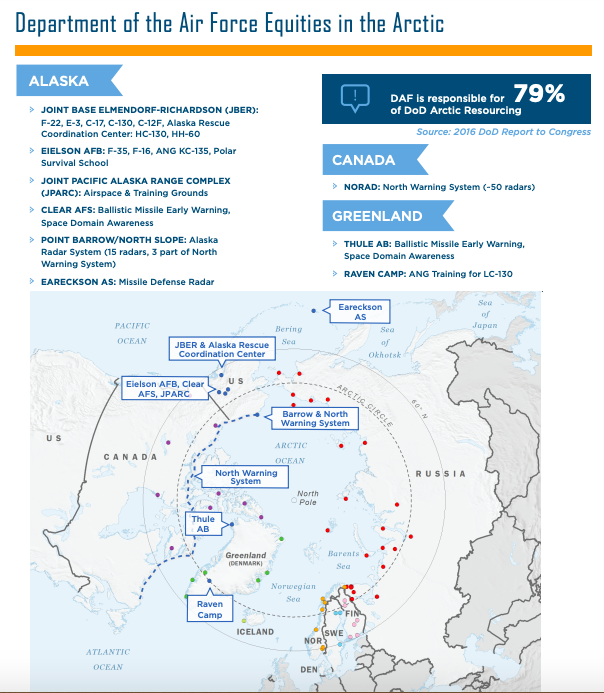 In Tuesday’s event, the Air Force Chief of Staff, Gen. David Goldfein, was politic enough to emphasize that the service is working closely with the other services, especially the Navy, and with the joint Combatant Commanders to ensure “seamless” joint operations in the region.

In particular, he referred to the ongoing series of Global Integration Exercises — launched by former Chairman of the Joint Chiefs of Staff Joseph Dunford — that are designed to allow more fluid operations across and between Combatant Commands. Indo-Pacific Command, European Command, and Northern Command (which covers North America) all have jurisdiction over pieces of the Arctic.

Sec. Barrett cited DoD’s familiar litany of concern with Russian and Chinese aspirations and activities in the far north.

“No other country has a permanent military presence above the Arctic Circle comparable to Russia’s. Recent Russian investments in the Arctic include a network of offensive air assets and coastal missile systems,” she said. (Of course, no country has as long an Arctic coastline as Russia, either, and Russian leaders remember the US and other Western powers staged a desultory intervention in Siberia in 1918-1920).

“China is not an Arctic nation by geography, but through its One Belt, One Road initiative It has laid the claim to an Arctic role, and has become an observer to the Arctic Council,” she said. “We’re perfectly prepared to accept fair and benevolent action there and having China as a participant, but we will be attentive to overreaching.”

The strategy, signed by Barrett, Goldfein, and Space Force/Space Command head Gen. Jay Raymond, lays out four lines of effort along with the sub-elements of each: “Vigilance in All Domains; Projecting Power through a Combat-Credible Force; Cooperation with Allies & Partners; and, Preparation for Arctic Operations.”

Barrett said that the “vigilance encompasses everything from weather forecasting and consistent communications to threat detection and tracking.” The strategy document further notes that missile defense and space capabilities — including intelligence, surveillance and reconnaissance (ISR) and all-domain awareness — also are key to the mission.

As for power projection in the region, Barrett mentioned in particular the Air Force’s deployment of F-35 stealth fighters to Alaska as critical in enhancing capabilities. The service is in the process of moving some 54 F-35s to Eielson AFB in Fairbanks.

She also noted that the service is looking at recapitalization of Lockheed Martin’s LC-130, the ski-equipped polar version of the C-130 Hercules transport plane. The Air National Guard currently has 10 operational LC-130H aircraft, according to the service’s 2021 budget documents.

“The LC-130s have been pivotal to getting access to terrain that otherwise would be inaccessible,” Barrett said. “So the LC-130 is very important, and recapitalizing is a significant issue to us.”

“The Air Force will advance recapitalization and explore modernization of existing and emergent polar mobility platforms that are critical for reaching remote areas,” the new strategy says.

In addition, the strategy emphasizes efforts to sustain and modernize bases in Alaska and at Thule, Greenland to allow regional power projection. As Breaking D readers know, Gen. Terrence O’Shaughnessy, head of Northern Command, is particularly interested in upgrading command, control and communications (C3) capabilities in the Arctic.

Raymond told the Atlantic Council webinar that one of the new challenges for Arctic infrastructure is dealing with new challenges cropping up due to the warming climate.

“What has changed is the thawing and the melting of the permafrost,” he said. “It can have significant challenges on our infrastructure. It can cause foundations of buildings and equipment to shift. It can impact the structural integrity of those facilities .. for example cause increase runway maintenance,” he said.

Goldfein stressed the strategy’s high priority to enhance operations with NATO and regional allies, including Canada, Denmark and Norway. “You know only through cooperation with our allies will be be strong in Arctic or any other location in the globe,” he said.

But he also said DoD and the Air Force should be making an effort to establish rules of the road and norms of behavior in the Arctic, and reaching out to Russia to identify mutual interests.