Airbus A220-300 in Yellowknife for Cold Weather Trials

Canada has a long tradition in cold-weather aeronautical testing. As early as the winter of 1926-27 a Siskin fighter conducted a host of demanding trials from the RCAF station at High River, Alberta. Subsequently, the RCAF and National Research Council did much pioneering R&D re. cold weather. The pace of all such science was spurred by the war. Postwar, the RCAF’s famous Winter Experimental Establishment tested a long list of aircraft in severe weather from such bases as Namao (Edmonton), Fort St. John, Cold Lake and Churchill. See Sixty Years: The RCAF and CF Air Command 1924-1984 for a good history of WEE Flight. See Aviation in Canada: Evolution of an Air Force for further coverage in the pre-WWII period. 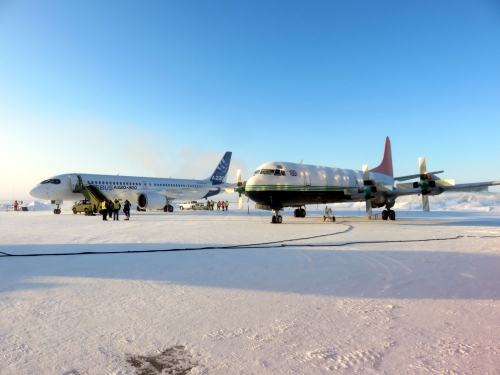 Yellowknife recently had a rare visitor and another chance to feature itself as a centre for cold weather trials. On January 12, 2020 Airbus A220-300 C-FFDO landed there from Winnipeg to undergo some special testing. On taxiing in at Yellowknife, “FDO” parked beside the Buffalo Airway Lockheed Electra, whose captain, Tony Jarvis, took this great photo. What a contrast in air transport history, right! (The Electra is C-GZFE, which  had begun in 1961 as N138US with Northwest Airlines. There it gave good service into 1971, then flew with operators from Air Florida in the US to Atlantic Airlines in the UK (it had become a freighter in 1977). Finally, in 2013 “ZFE” was acquired by Joe McBryan’s legendary Buffalo Airways. Today it’s one of those “lifeline” Arctic freighters, delivering groceries and all sorts of other supplies and equipment to the north’s many isolated communities and mine sites.)

That afternoon Yellowknife had a temperature of -45C, so no one could complain about conditions. “FDO” sat outside being “cold soaked” (sitting outside with all aircraft power turned off). Apparently, this testing was about increasing the A220’s certified cold weather operations limit from -35C to -40C. On January 14 “FDO” — by then thoroughly cold soaked — made a 49-minute local flight. Ground testing continued until January 18, when it departed for base at Wichita via Calgary and Kansas City.

A220-300 “FDO” was manufactured in Montreal in March 2016 as Bombardier CSeries CS300. Designated “Flight Test Vehicle 8”, to January 20, 2020 it had logged 77 flights/207.46 flying hours. Last week Air Canada introduced the A220 to its fleet, so we’ll soon be enjoying this great new airliner on Air Canada’s North American services. 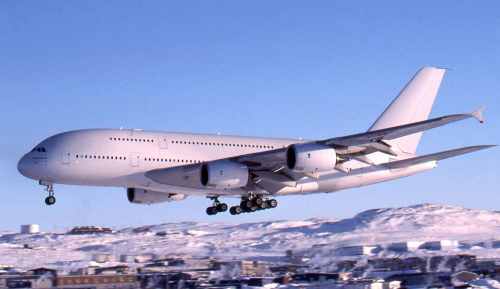 Early in 2006 John Graham, the airport manager at Iqaluit, gave me a heads-up that an A380 was coming to town for cold weather trials. This sounded like a great opportunity, so I organized a trip north from Ottawa on a FirstAir 737 for February 3. The A380 was due on the 6th, so I had time to cover some other aviation. On the 4th, for example, I went over to Resolute Bay and back on a FirstAir 748. Next day I spent around town and the airport, then the 6th dawned as a fine, clear day. John gave me the A380’s ETA, so I had time to set up at the arrival end of the runway. Here’s one of the shots I took as the mighty A380 (call sign “AIB501”) was about to touch down. This was the first ever A380 landing in “The New World”. The aircraft was F-WWDD sn004 (the 4th A380, now in a museum in France). Some cold soaking was conducted with “WDD” parked off the main ramp — see photo of it with the Lynden Air Cargo L.100 Hercules. Does this look cold enough for you? “WDD” also made 1 or 2 test flights that week. In the other photos, “WDD” looms across the snow-covered ramp as a FirstAir BAe748 and ATR-42 await their next trips. Finally, a scene with “WDD” being de-iced for a test flight. 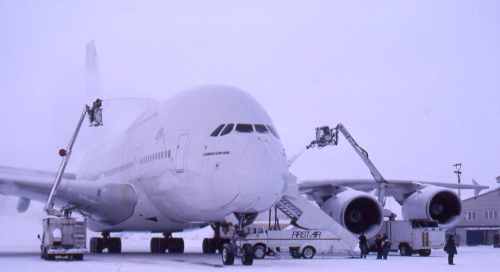 After another wonderful Arctic trip, I finally got back to Toronto on February 13. Thanks to Tony Jarvis for cluing me in to the A220 at Yellowknife, which led to this little bit of CANAV blog history. Cheers … Larry