The Boeing 707 — Early Development and Initial Service This is a very worthwhile viewing experience. It’s a 1960 Boeing promotional movie with some very nice footage from around the world, including by one of my earliest correspondents, the great Gordon S. Williams. Have a look and enjoy — just google this link and you should get there:     https://youtu.be/JEFjhLwThmc

And … if you have another spare 6 minutes, check out Rick Mercer’s wonderful coverage of his flight in the Canadian Warplane Heritage Museum Lancaster! 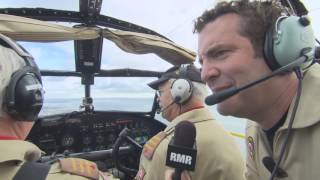 Dave Fairbanks Honoured in Canada and the United States

While serving the RCAF during WWII, Dave Fairbanks mainly flew the powerful Hawker Tempest V, an advanced British fighter that was greatly feared by the enemy.

Among new members inducted at the Canada’s Aviation Hall of Fame annual dinner this year (2019) in Montreal was the great David Charles “Dave” Fairbanks. Born in Ithaca, New York in 1922, early in WWII Dave joined the RCAF, where he excelled as an instructor, then as a fighter pilot. In combat in the European Theatre of Action, Dave gained “ace” status and received the Distinguished Flying Cross three times. Postwar, he led the way with several key projects as a test and demonstration pilot with De Havilland Canada in Toronto. That’s the period when I first met Dave. During the Toronto airshow on September 2, 1961, Dave flew me back and forth between Downsview Airport and Toronto Island Airport in Caribou No.2 CF-LAN. Flipping through some early pages in my passenger logbook, I see that I flew again with Dave on August 28, 1963 (at the same airshow) in Caribou CF-OYE. Those were the years when we local high school aviation buffs often could scrounge such flights from the ever-friendly DHC pilots.

Dave Fairbanks was a prominent part of several key De Havilland Canada programs during the height of the STOL (short takeoff and landing) development period. His first big assignment was the DHC-4 Caribou, which he and fellow pilot George Neal flew initially on July 30, 1958. Here they are that day (Dave on the right, George on the left) with flight test engineer Hans Brinkman.

CF-LAN-X was the second prototype Caribou. The US Army became the main Caribou operator.

Dave Fairbanks certainly made his mark at DHC. Besides Caribou test flying, from October 1959 to May 1960 he and A.W. “Mick” Saunders piloted CF-LVA on the first Caribou round-the-world sales tour. Dave contributed steadily to various on-going and upcoming DHC projects, the Twin Otter, Buffalo and Dash 7 included. He also carried out a lot of routine flying duties. Recently, Darrel Smith told me about one of these. Darrel had been with the Vancouver RCAF air reserve flying everything from Harvards and Vampires to Otters. When his squadron (442 Sqn) received its first Otters in 1960, Dave Fairbanks went west to make himself useful by giving some Otter seminars and flying instruction to 442. Lately, Darrel told me, “Certainly nice that Ithaca’s air event [see below] was dedicated to Dave. I too was really pleased that he was inducted into the CAHF last May. I had the pleasure of flying with Dave when we received our first Otters at 442, He was certainly a very well respected pilot.”

Following the Caribou, Dave did much development flying on the DHC-5 Buffalo and DHC-6 Twin Otter. Here, he does a dramatic Buffalo STOL departure from a baseball park along the East River in New York City. This was part of a grand demonstration to show the potential to city life of STOL aircraft. Then, a Twin Otter is seen landing in a tight spot during the same demonstration. These two wonderful photos were taken by the late, great Howard Levy of New Jersey.

Dave Fairbanks during his later years at DHC.

On February 20, 1975, just two weeks after the Dash 7 had been rolled out, Dave died of unexpected heart failure at the young age of 52. Happily, the basic details of his eminent aviation career are recorded in Fred Hotson’s 1995 book, De Havilland in Canada, and in Norman Franks’ 2019 book, Gallantry in Action: Airmen Awarded the Distinguished Flying Cross and Two Bars 1918-1955. There’s also a good summary of Dave’s life on the “Canada’s Aviation Hall of Fame” website cahf.ca. You can check out these sources for the fuller story.

When you get a chance to visit Canada’s National Air Force Museum in Trenton, Ontario, be sure to look for the wonderful display of F/L Dave Fairbanks’ memorabilia, his wartime logbook and DFC Citations included. (Photo by Ken Swartz)

How did the process work to get Dave Fairbanks inducted into the CAHF? The initial push came from longtime DHC pilot, Tom Appleton. Tom had worked under Dave since the mid-1960s as a test and demonstration pilot, excelling especially in Buffalo test and development flying. Tom later was president of the Amphibious Aircraft Division at Bombardier Aerospace, president of Piaggio America, and to this day is active in aerospace. In 2018 he asked if I would second his nomination for Dave to the CAHF. That, of course, was an honour and, happily, Tom’s efforts panned out – Dave was selected. However, the preliminaries had not been “a piece of cake”.

Although Dave was well known in test flying circles around the world, few details about his personal life were known. Tom knew that he had grown up in Ithaca, but Dave seemed to have no known relatives. His wife was believed to have passed away and they had had no children. Dave’s parents had long ago passed on and there was no sign of any siblings. Meanwhile, I had heard that MGen (ret’d) Mike Hall now was airport manager at Ithaca Tomkins Airport. I had known Mike when he commanded the 174th Tactical Fighter Squadron, a New York Air National Guard A-10 unit based at Syracuse. I connected Tom with Mike, then, one weekend Tom visited Mike to see what more he could learn. This foray paid off, for Tom found some leads about Dave’s youth, etc. through the Ithaca high school, local newspaper archives and other historical sources. Meanwhile, retired Canadian War Museum historian, Hugh Halliday, provided us with all known details about Dave’s wartime RCAF career by reviewing his personnel file at Library and Archives Canada. After filtering through all such material, Tom was able to present the CAHF with a good argument in Dave’s favour. At the CAHF Induction Dinner held in Bombardier’s business jet completion hangar at Dorval (Montreal) in May, we all enjoyed a video covering Dave’s accomplishments. CAHF historian, John Chalmers, CAHF stawald, Mary Oswald, and others at the CAHF in Wetaskiwin, Alberta teamed to create this wonderful piece of history. Mike and Sheela Hall attended from Ithaca. Dave Fairbanks now was formally recognized in the wide world of aviation history. Everyone went home satisfied and the Hall of Fame staff began looking ahead to 2020 and a new group of inductees.

Meanwhile, down in Ithaca other wheels of aviation history were turning. When he took over as airport manager in 2014, Mike Hall had introduced an annual airport open house. For 2019 it seemed important to him that this year’s event should be dedicated in honour of Dave Fairbanks, and so it happened. Tom, his wife, Heather, and I were invited. On September 13 we drove from Toronto to Ithaca, where we enjoyed a wonderful evening in one of the main Ithaca Tomkins Airport hangars. Banquet tables were arranged around the EAA’s fabulous B-17 “Aluminum Overcast” (an impressive backdrop), Mike and Tom spoke, and a fine time was had by all.

The crowd starts to gather in the hangar for the Dave Fairbanks event. Then …  time to eat!

Mike Hall delivers his opening remarks. Through his distinguished USAF career, Mike flew NORAD’s top fighter – the F- 106. He later joined the New York Air National Guard, flying the A-10 and F-16 with the 174th TFS at Syracuse. Eventually, he commanded the squadron.

Next morning the airport tarmac was open to the public. It was great fun with many displays of aircraft, collectable cars, and much airport equipment for everyone to enjoy at the “hands on” level. Topping it all off, “Aluminum Overcast” made several passenger flights.

The flying club hosted a pancake breakfast. Visitors packed the hangar. Then, EAA B- 17 N5017N on the tarmac ready for its first of several flights. Happily, the weather was starting to clear. The detail photo of the instrument panel shows a mixture of old and new technology.

N5017N “Aluminum Overcast” as I first saw it at the Canadian Warplane Heritage airshow at Hamilton, Ontario in June 1979. Note that it still was in “stripped down” condition. Originally USAAF tail number 44-85740, N5017N had been delivered too late (1945) to see combat. Instead, in 1947 it was sold for $750 scrap value to Charles Winters, who soon re-sold it for $3500. Registered N5017N, it was converted to haul cargo, so all excess weight (gun turrets, etc.) was removed. It then started freighting between Florida and Puerto Rico. In 1949 N5017N was re-sold for $28,000 (how its market value had exploded!) to Aero Service Corp. and converted for high level aerial photography. Later, N5017N had a life as a bug sprayer, until finally getting into the warbird world in 1978, when acquired by Dr. William Harrison. In 1980 he donated the plane to the EAA, which eventually, re-converted it to look as it would have when rolled off the Boeing production line. For more about “Aluminum Overcast” see Scott A. Thompson’s superb book Final Cut The Post-War B-17 Flying Fortress: The Survivors and B17 Aluminum Overcast Tour – EAA

Lots of car collectors turned out for the Saturday event at Ithaca Tomkins Airport. Here, vintage car aficionado, Tom Appleton, admires a 1937 Packard, and talks it over with the owner.

All sorts of airport equipment were on display, including this 1958 American Lafrance (Dodge Power Wagon) fire truck. Meanwhile, the nearby community of Lansing was taking visitors on “flights” in the bucket of its 100-foot aerial ladder.

Ithaca being in a New York state snow belt, the airport is ready for the worst in winter storms. A variety of exotic snow removal equipment is always at the ready once winter closes in. Everyone had a chance to inspect this amazing technology.

Airport manager, Mike Hall, (right) on duty on the ramp.

Ithaca is renowned as the home of Cornell University. Dave Fairbanks grew up in this rarefied atmosphere and his own father was a Cornell professor. For our weekend visit, our hosts set us up royally in the Statler Hotel on the Cornell campus. Here are a few snapshots taken during my walk-arounds. First, the Ezra Cornell monument, then the famous Cornell clock tower.

Another typical scene on the historic Cornell campus.