To start off this year’s Canada Day weekend I took the TTC’s 501 “Flexity” streetcar downtown for a morning of fun out on Toronto Bay. Big attraction? The Tall Ships are in town! “How best to see and photograph the Tall Ships”, was the question. Someone was willing to rent me a small motor boat, but since I’ve had no experience in recent decades, I passed on that. Instead, I talked to the keen fellows at “The Pirate Taxi”, who were happy to take me out for a fair price for half an hour to get some photos. 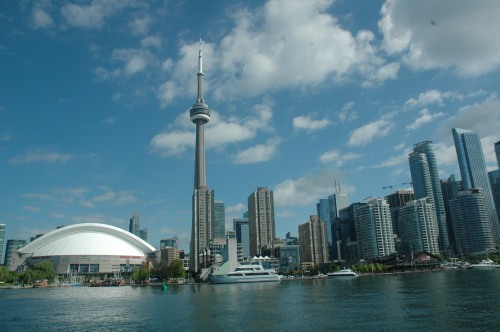 A classic Toronto skyline scene as we pulled out from Pirate Taxi’s slip. 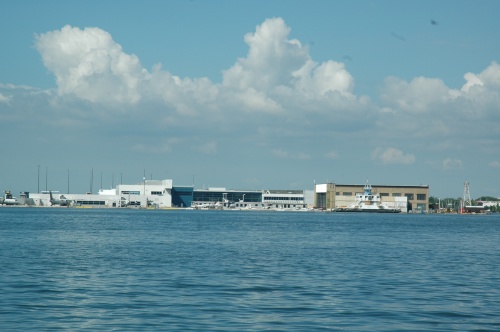 A quick glance westward and this was the view of Billy Bishop Airport. No doubt about it … the water is high, comparing the airport breakwall to previous “normal” years. 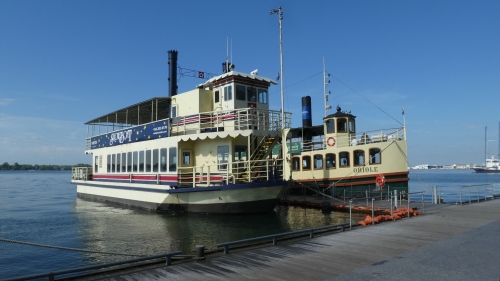 Two of the many sightseeing and party boats that run day and night through Toronto’s booming summer tourist season. 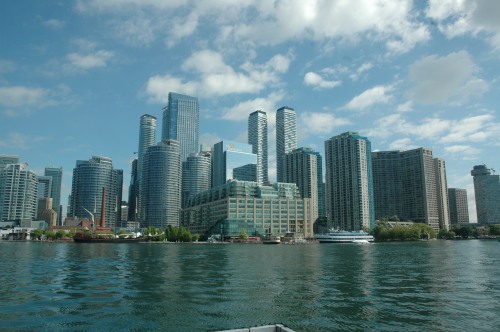 Toronto’s anti-everything city councillors groaned for decades about how the Gardiner Expressway allegedly has “ruined” our cityview. Those same funny people invariably have voted for any and every other sort of waterfront development, the higher the better. How do they like the view now? It’s all yours, can’t even see the Gardner anywhere in 2019! But what the heck, eh … Toronto’s a fantastic modern city and city’s cry out to grow. We’re all pretty well good with that. But … those same goofy lefty/anti-everything councillers are still decrying the Gardiner, which nonetheless remains Toronto’s unequalled gem of an east-west transportation corridor along to lake.

The tall ships start appearing as we turn eastward. To the right is the Toronto ferry dock at the foot of Yonge St. What a beautiful cityscape, hard to beat for any diehard urbanist.

The Milwaukee-based Sailing Vessel Denis Sullivan was launched in 2000. The ship’s website notes: “The schooner is a modern educational sailing vessel with two diesel engines, a scientific laboratory, two computer workstations, and modern communication and navigation equipment… The vessel can carry up to 50 passengers on day sails and 21 participants overnight. She is complemented by a professional crew of ten.” For any of the ships shown here, you can find all the specs, etc. on the various websites.

S/V Bluenose II of Lunenburg, Nova Scotia is a near-perfect replica of Canada’s renowned fishing and racing schooner Bluenose (built in 1921, sank in 1946). What a treat to see this beauty in Toronto Bay. 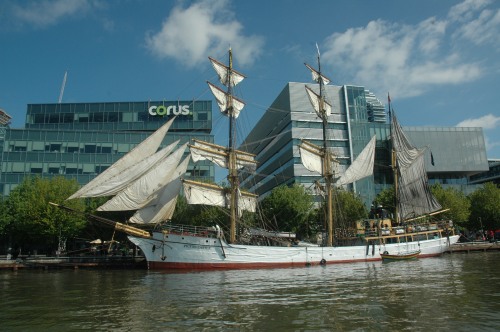 Built as a fishing trawler in 1928 and in Royal Navy service as a minesweeper in WWII, the (now) 3-masted barque S/V Picton Castle is registered in the Cook Islands, but is home-based in Lunenburg. Since 1999 it has circumnavigated the world four times. 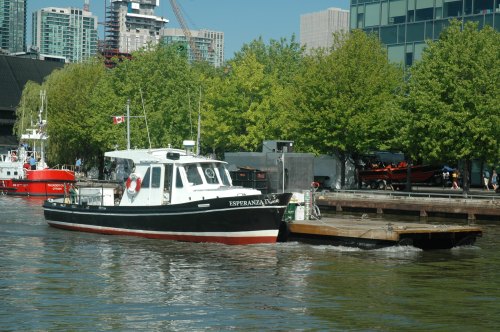 The show must go on, holiday of not. Here, the local workboat Esperanza IV barges some essential supplies (kegs of beer, etc. for long weekend needs) to a destination along the bay. 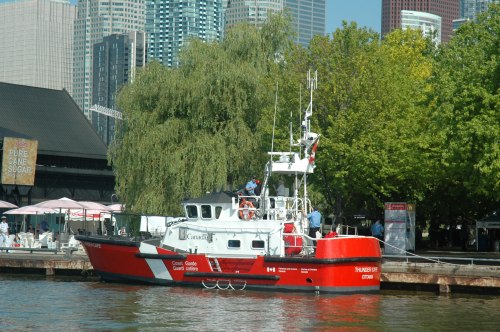 Canada Coast Guard’s Thunder Cape is one of 36 “Cape” class lifeboats built for the CCG in Kingston, Ontario. It’s 47 feet long with an 18-ton displacement. CCGS Thunder Cape is based in Meaford on Georgian Bay.

HMCS Oriole is a Canadian naval sail-training vessel. Built as a civilian vessel in 1921, it was commissioned into the RCN in 1952. The RCN notes: “The Oriole provides sail training to junior officers and noncommissioned officers as part of their introduction to life at sea. She also provides a venue for teamwork exercises and adventure training available to all of the Canadian Forces.” 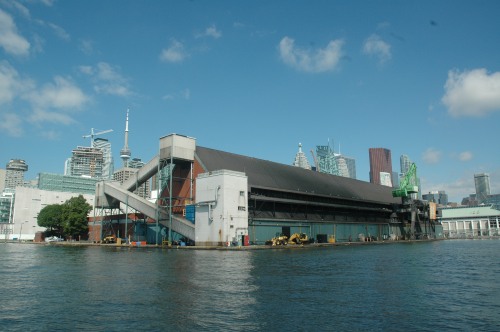 A short run along Toronto Bay reminds us a little about “days of yore”. The waterfront originally was all about industry, commerce and passenger travel. Of the bay’s once vibrant industrial era, only the great Redpath sugar refinery still serves its original purpose. 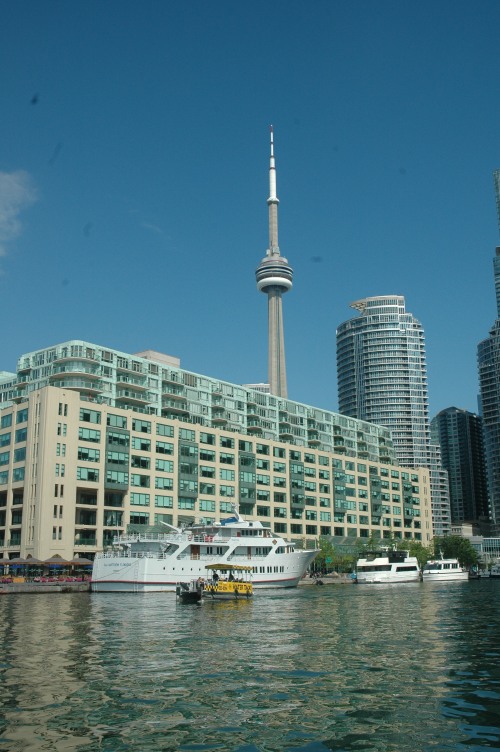 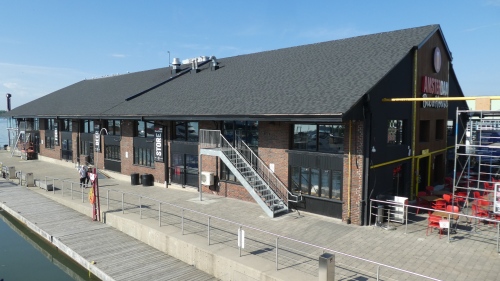 The busy Amsterdam Brew House began life early in the 1900s as a busy Toronto pier. Lake freighters and passenger ships docked here into the 1950s.

A closer view of the ferry docks showing Toronto’s famous island ferries, William Inglis (1935) and Sam McBride (1939). They’re worth looking up to check out their amazing histories. In 1941, for example, Sam McBride was in Toronto Bay when a low-flying Norwegian AF Northrop training plane crashed into it. Two Norwegian fliers lost their lives, but it was Sam McBride’s lucky day.

Launched in 1980, S/V Faire Jeanne is based down Lake Ontario at the famous Seaway port of Brockville. Through the weekend thousands of visitors will walk the waterfront getting a close-up view of these great ships, all of which are open to the public for a small fee. 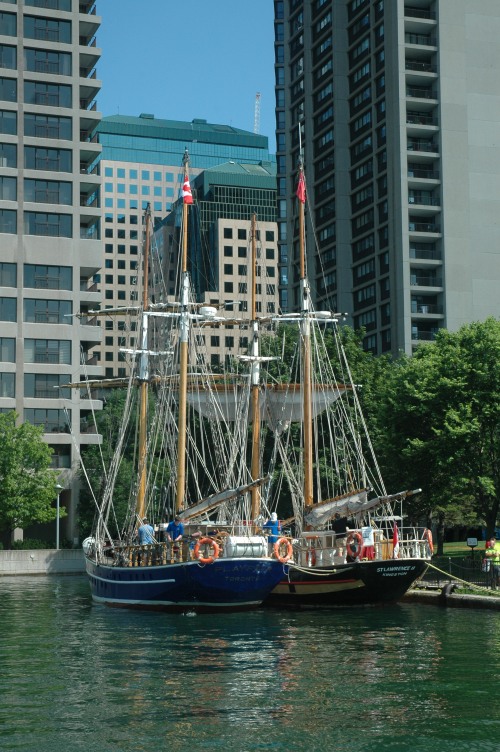 The brigantines Playfair of Toronto and St. Lawrence II of Kingston have trained thousands of summer students in Great Lakes sailing over the decades.

Another of Toronto’s busy water taxis heads for the offshore islands, where flooding doesn’t seem to deter the weekenders. 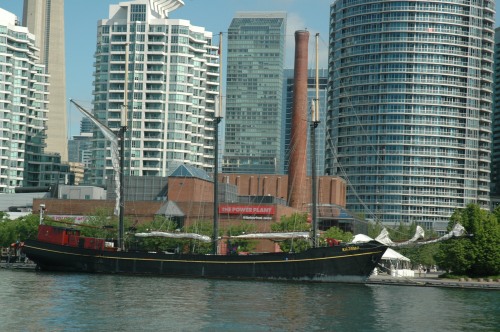 The owner notes about this hard-working old vessel: “Step aboard and experience the finest restored Tall Ship on the Great Lakes.  Launched as the Wilfred in Rendsburg, Germany in 1930, the KAJAMA traded under sail for nearly 70 years. She was a familiar ship in ports from Northwest Spain, through western Europe, and as far north as Norway and Russia. In 1999, KAJAMA was delivered transatlantic to Toronto’s Waterfront and restored to her original profile. Sail aboard the Tall Ship that was seen on the Amazing Race.” 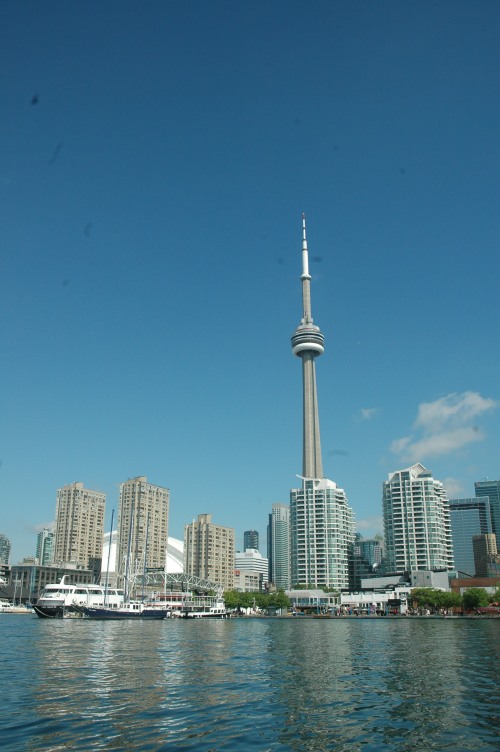 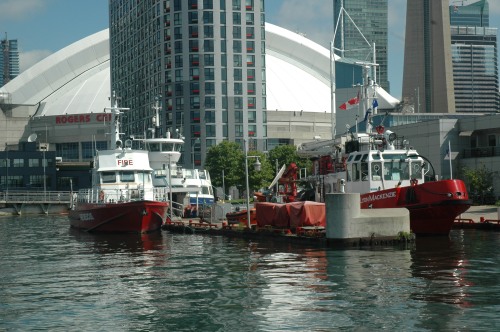 After a great jaunt up and down the bay, we’re pulling back into our slip. This spot happens to be home to Toronto Fire’s main two vessels, Wm Lyon Mackenzie being the “flagship”.