To all CANAV readers … Volume 8 of “Aviation in Canada” now is at the printer. You can expect to see Aviation in Canada: Fighter Pilots and Observers 1915-1939 in September. Solid Canadian history from start to finish, this authoritative book revives a key theme in Canada’s aviation heritage in a landmark year – the 100th Anniversary of the end of the First World War.  This is Canada’s only major title in print covering the nation’s pioneers of aerial combat. It honours the men, the aircraft and the organizations, detailing in a fresh light the incredible story from training in Canada as early as 1914, to the deadly skies over the Western Front, Italy and wherever else the men were needed. The story continues after 1918, covering the many roles played by Canada’s wartime aviators through the interwar years – how the role of the fighter pilot and observer waned at first, then gradually was revived, initially with the Siskin and Atlas, finally — on the eve of war — with the Hurricane, etc. Aviation in Canada: Fighter Pilots and Observers 1915-1939 is 184 pages, extra-large format (9×12 inches), hardcover, beautifully designed and produced with a spectacular collection of 350 photographs. There’s never been anything like it in Canadian aviation book publishing. Having seen our previous volumes in the series, you’ll know what to expect. Sticker price? $50.00. Watch our blog for more details and drop me an email if you’d like to receive Volume 8 updates in the next few weeks. Cheers … Larry (larry@canavbooks.com)

Since CANAV published Aviation in Canada: The CAE Story, CAE has been on a steady climb, introducing new products and seeing share value and profits steadily rising. When I started researching the company’s history in 2011, a single CAE share was valued at about CDN$10.00, a price that had been stagnant for years. By the time the book was published in 2015, however, CAE share value had risen (literally) overnight to CDN$15.00 and today (August 15, 2018) sits at CDN$25.58. In his Canadian Press item today, Christopher Reynolds brings us up to date about this great Canadian company. If you don’t yet have your copy of The CAE Story (one of CANAV’s best ever titles — you’ll see what I mean once you get your hands on a copy) drop me an email today and fill that gap on your aviation bookshelf. Also … for more CAE info check CANAV’s blog: http://www.canavbooks.wordpress.com&nbsp; Cheers … Larry                                                                       larry@canavbooks.com 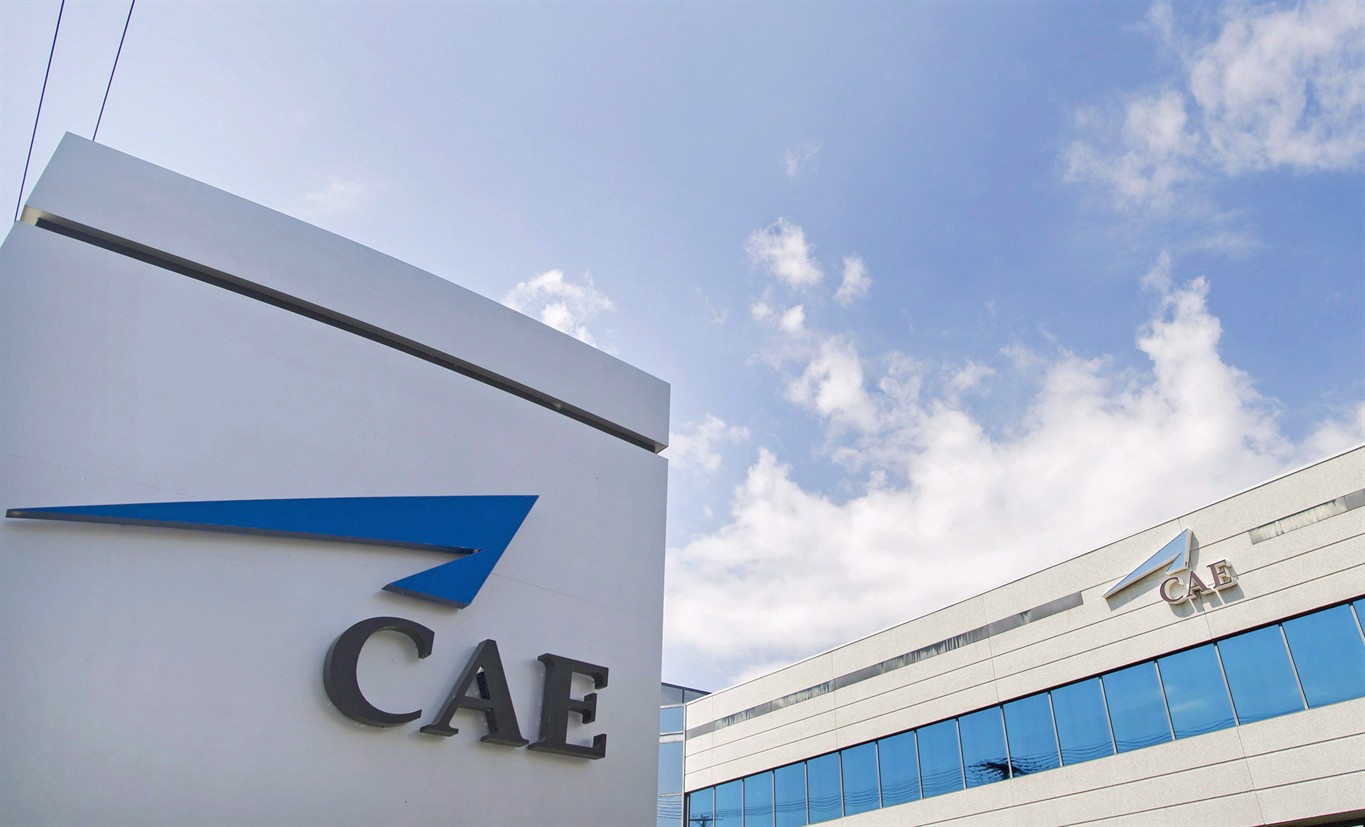 CAE corporate headquarters are shown in Montreal on August 10, 2016. The CEO of flight simulator CAE Inc. suggested U.S. President Donald Trump’s appetite for defence spending is a boon to the Montreal-based company, with newfound access to contracts tied to top-secret missions paving the runway for more revenue. THE CANADIAN PRESS/Graham Hughes

MONTREAL – The head of flight simulator company CAE Inc. said Tuesday U.S. President Donald Trump’s appetite for defence spending is a boon to the Montreal-based company, as newfound access to contracts tied to top-secret missions pave the runway for more revenue. “On the defence side, budgets continue to be on the rise worldwide, and in the U.S. they are at historical highs,” president and CEO Marc Parent told shareholders at an annual general meeting Tuesday. On Monday, Trump signed a $716-billion defence spending bill for 2019, an $82-billion increase from 2017 and a dramatic upswing from most Obama-era military budgets. CAE’s acquisition of Virginia-based Alpha-Omega Change Engineering earlier this month opens the hatch to “top-secret missions,” mainly out of the U.S., Parent told reporters.

An agreement between the U.S. government and a CAE subsidiary allows a proxy board made up of two American generals and a military contractor executive to oversee the high-security contracts, he said. “That opens up an extra $3 billion of potential market for us. So that brings our total addressable market in the world to $17 billion,” Parent said. As to what the classified missions involve, he said only, “You can speculate all day long.”

Parent defended how CAE potentially stands to benefit amidst heightened military spending south of the border, more combative language from the White House and the creation of a new armed services branch focused on fighting wars in space. “It’s certainly not offensive,” Parent said of CAE’s training and simulator programs. “It’s for defence and security forces and search and rescue. To me, there is a societal benefit to what we do. It’s to help personnel execute their mission and save lives that way,” he said. “I don’t see it negatively.”

CAE also increased its dividend as it reported its first-quarter profit and revenue improved compared with a year ago. The simulator maker says it will now pay a quarterly dividend of 10 cents per share, up from nine cents. The increased payment to shareholders came as it reported a first-quarter profit attributable to equity holders of $69.4 million or 26 cents per diluted share for the quarter June 30. That compared with a profit of $59.6 million or 22 cents per diluted share in the same quarter a year earlier. Revenue in the three-month period totalled $722 million, up from $656.2 million.

Lt Brian Peck of the Royal Air Force Canada flew Canada’s first air mail from Montreal to Toronto in a JN-4 on June 24, 1918. Here he is at the time, then a photo of his arrival with the mail at Leaside (Toronto). Read about this historic event in the June 2018 edition of the CAS publication, “The Canadian Aerophilatelist” and elsewhere. Peck’s mission was a bit of a comedy of errors, yet made it deservedly into the official records.

As you noticed in our previous blog (n.b. as always, any views stated on the CANAV blog are strictly my own), June 24, 2018 was the 100th anniversary of Canada’s first air mail. This event is covered in such books as Canada’s Flying Heritage (1954) and Aviation on Canada: The Formative Years (2009), and in the newsletter of the Canadian Aerophilatelic Society. If you follow the early years of Canada’s great aviation heritage, you will not regret joining the CAS (you don’t need to be a stamp collector). To follow through (please do) see http://www.aerophilately.ca

A sample page from Aviation in Canada: The Formative Years covering Canada’s earliest air mail flights. Then, the crowd scene when the second Canadian airmail flight (also a JN-4) reached  Ottawa from Leaside on August 27, 1918.

On June 30 an enthusiastic crowd packed into the Leaside Pub on Laird Drive in Toronto to celebrate Lt Peck’s historic mail flight. Represented (naturally) were the Canadian Aerophilatelic Society and the Canadian Aviation Historic Society, while such other organizations as the Great War Flying Museum and a number of history-minded Leaside people added to the fun. But what about Canada Post?

A highlight of the afternoon was the arrival overhead (to honour Lt Peck and his airmail “first”) of the Great War Flying Museum’s Sopwith 1½ Strutter replica. Pilot Kees van Berkel made several wonderful passes over the pub and neighbourhood. A hundred years ago the sky here would have been full of JN-4 Canuck trainers, for the Royal Flying Corps Canada’s Leaside aerodrome then occupied this very corner of Toronto. Sheldon Benner caught this candid scene. Then … the crowd having a great time in Leaside’s 30+ degree that afternoon.

“Leaside Life” has published this nifty little piece about the air mail celebration.

Around the world any major postal anniversary (such as a 100th anniversary of the air mail — what could be more important to postal historians) normally is greeted with commemorative postage stamps and important historic events sponsored by the post office itself. Totally befitting, right? However, as far as I know, Leaside was Canada’s only formal celebration of the 100th anniversary of Canada’s air mail. So … that Canada Post didn’t bother to send a representative is hard to believe. Neither was even one commemorative air mail stamp issued from Ottawa. Only in Canada you say? What? Take a look (in contrast) to what the ever-history loving United States did this year to commemorate the 100th anniversary of its air mail (also, look on the web to see how Australia celebrated its air mail anniversary in 2014):

First of Two United States Air Mail Forever Stamps to be Dedicated May 1WASHINGTON — The United States Postal Service will honor the beginning of airmail service by dedicating two United States Air Mail Forever stamps this year. The first, depicted above in blue, commemorates the pioneering spirit of the brave pilots who first flew the mail in the early years of aviation. The first-day-of-issue ceremony will take place May 1, 2018 at 11 a.m. at the Smithsonian National Postal Museum, 2 Massachusetts Ave. N.E., Washington, DC. The event is free and open to the public.

On May 15, 1918, in the midst of World War I, a small group of Army pilots delivered mail along a route that linked Washington, Philadelphia, and New York—initiating the world’s first regularly scheduled airmail service. The United States Post Office Department, the predecessor to the U.S. Postal Service, took charge of the U.S. Air Mail Service later that summer, operating it from Aug. 12, 1918, through Sept. 1, 1927. Airmail delivery, daily except on Sundays, became part of the fabric of the American economy and spurred growth of the nation’s aviation industry. The second stamp, red and pictured above, will commemorate this milestone with its first-day-of-issue to take place later this summer. Both stamps, printed in the intaglio print method— a design transferred to paper from an engraved plate — depict the type of plane typically used in the early days of airmail, a Curtiss JN-4H biplane. The biplane was also featured on the stamps originally issued in 1918 to commemorate the beginning of regularly scheduled airmail service. The stamp designs evoke that earlier period.

For airmail service to succeed in the early days of flight, the Post Office had to develop profitable routes, such as between New York and Chicago, and to establish the infrastructure for safely making night flights. It set up lighted airfields and erected hundreds of airmail guide beacons between New York and San Francisco so that by 1924 regularly scheduled, transcontinental flying was possible, day and night. Airmail delivery, daily except on Sundays, became part of the fabric of the American economy and spurred the growth of the nation’s aviation industry. The United States Air Mail stamp is being issued as a Forever stamp. This Forever stamp will always be equal in value to the current First Class Mail one ounce price.

On the 100th anniversary of the beginning of regular airmail service, this stamp celebrates the courage of the pioneering airmail carriers and the foresight of those who fostered the new service and made it a success. The stamp, printed in intaglio, features a drawing of the type of plane typically used in the early days of airmail, a Curtiss JN4H biplane. This type of biplane was also featured on the 24 cent stamp that was issued in 1918 to commemorate the beginning of regularly scheduled airmail service. The words “UNITED STATES” and “AIR MAIL” are respectively at the top and bottom of the stamp. “EST” is an abbreviation for “established.” The stamp designer and typographer was Dan Gretta; Greg Breeding was the art director.

Pretty impressive, no? But we’re talking about the United States of America, so what else would one with half a brain expect? This certainly makes one wonder about Canada Post being conspicuous by its absence at the Leaside Pub. Just another example of Ottawa’s growing insouciance when it comes to our great country’s incomparable accomplishments? Or … is it simply that Canada Post has no one with a clue? Regardless, Leaside, the CAS, CAHS, GWFM, etc. pulled it off royally.

Enjoy the rest of your summer … Larry      larry@canavbooks.com