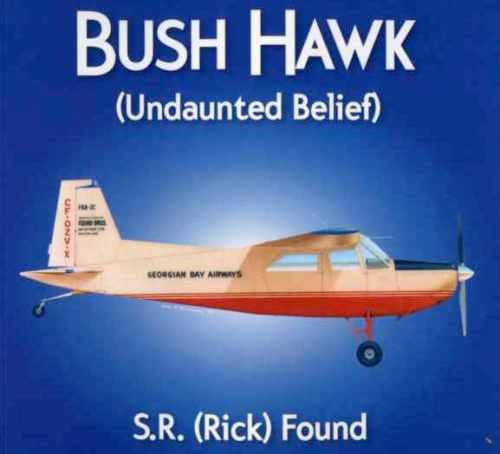 Bush Hawk Rick Found’s detailed history of Canada’s famous Found Brothers Aviation. Having written the original history of FBA (see Air Transport in Canada) I can highly recommend this fine new book. Bush Hawk covers everything from the early Found years to the late 1940s FBA-1 “Green Hornet”, then on to the FBA-2C bushplane. Production ensues in 1963, but there are steady company’s woes. Sales are difficult and there is head-butting in the marketplace with Cessna, Piper, etc. FBA is forced to close its doors, then comes a failed effort under new management with the FBA Centennial 100. FBA is revived again in the 1980s, produces the outstanding Bush Hawk, morphs into the Expedition company, then fades again in the 2000s. This is an important Canadian story, on a parallel with the Fleet 50, Fairchild Husky, Avian 180, ST-27, etc. Highly recommended for anyone seriously following Canada’s great aviation heritage. 199pp, softcover, photos. $27.50 A 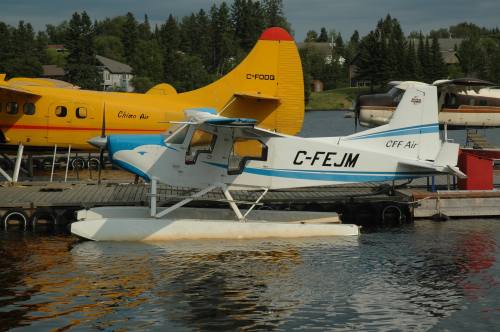 During my travels this summer in Northwestern Ontario I came across three of the original 1963-64 FBA-2s, including C-FRXJ near Nestor Falls. These rugged old work horses barely hiccup decade after decade, clear proof that the Founds designed a good one starting back in the 1940s. On the same trip I spotted 1990s Bush Hawk C-FEJM at Red Lake. Cheers … Larry

Exile Air: World War II’s Little Norway in Toronto and Muskoka Andrea Baston has spent years working on this epic WWII story. To begin, she provides detailed background ref. the 1940 Nazis invasion of Norway, and how Norway and the UK struggled to stave off disaster. Coverage of the air war includes RNoAF 1920s Fokkers and RAF biplane Gladiators putting up strenuous opposition.

Norway is overwhelmed, but the government, treasury and many citizens make it to the UK. By June 1940 arrangements are made to establish a Norwegian air training plan in Canada. “Little Norway” is established at Toronto Island Airport, with almost a hundred aircraft initially assigned, Curtiss P-36 fighters included. Training officially begins in November. All the details are here, including the expected growing pains and how Little Norway dovetailed with the BCATP. Besides all the training, contracts, administration, housing, sports, social life in Toronto and — sad to say — accidents all are part of this outstanding book. Little Norway adds a base in Muskoka to the north, where pilots train on the Fairchild Cornell. Eventually, the Norwegian graduates man RAF squadrons flying Spitfires, Catalinas, etc. All this also is carefully covered in detail.

Many personal profiles (based on in-depth research and interviews) are interwoven and everything is carefully covered to war’s end, the aftermath included, e.g., important events such as unveiling the commemorative monuments in Toronto and Muskoka. This nicely-produced, 240-page softcover is one of the most important Canadian aviation stories in recent years. Many photos, essential maps, notes, bibliography, index. An all-around beauty of an aviation book. $30.00 + $12.00 Canada Post + $2.10 tax = $ 44.10 (Canada). USA and overseas CDN$52.00.

Bagotville: 75 Years of Air Defence Here’s the info about Canada’s aviation blockbuster book for 2017. It’s a heavy duty effort – 512 pages, hardcover, some 1600 photos, 30 paintings and colour profiles – on and on, so no one will be disappointed in this wonderful production. Marc-André has done his usual in-depth coverage, assembling the exciting history of one of the great RCAF air stations, while blending both languages in his attractive/seamless layout. The book begins with WWII, with Bagotville training fighter pilots on the Harvard and Hurricane. Many famous aces pass through on instructing tours, many students go on to stellar careers. Next, comes the postwar era with Vampires, Sabres and CF-100s – all the historic squadrons, especially the all-weather CF-100 units – 440 and 432 form with CF-100 Mk.3s in 1953-54. Then come steady developments – 440 goes overseas, 413 forms up, the CF-100 Mk.4 and 5 arrive, there’s a steady stream of NORAD exercises, etc.
The CF-100 gives way to the CF-101 Voodoo era (410 and 425 sqns), then the tactical world arrives with the CF-5 and the renowned 433 Squadron. Finally come he CF-18 Hornet years with 425 Sqn. The evolution of Base Flight/439 Sqn is also covered – from T-33 to Griffon helio. Many other aspects of life at “YBG” are included in this huge colour production, from DEW Line helicopter times to Air Cadets and airshows. So don’t think that this overview begins to cover all the exciting content – the photo presentations alone will knock you out!

How to order? Let me know which of these lovely books you wish. Pay the sticker price, add (Canada only) $12.00 for one book, or $16.00 for two or more (USA and overseas send me an email to get a shipping price). You can use PayPal (pay to larry@canavbooks.com), or post a cheque to CANAV Books, 51 Balsam Ave., Toronto ON M4E3B6.

Recently, Jim Campbell of Winnipeg submitted these two lovely photos of Norseman CF-GLI, which he took at Snow Lake, Manitoba in 2008. In 2017 “GLI” is a restoration project in the Netherlands:

This summer brought some newsworthy Norseman activity. For one thing, in July I attended the Norseman Festival in Red Lake. This year’s event was just the best fun, pretty well the whole town and lots of visitors turning out around Howey Bay to watch the usual floatplane activity, line up for flights in the Norseman, Otter and Caravan, and enjoy the practices and shows by the Canadian Harvard Aerobatic Team, and the bushplane fly-past. There also were wonderful dinners at the Legion, a great ribs BBQ in the park, and fun and games in Centennial Park. Just a super weekend. Here are a few photos: 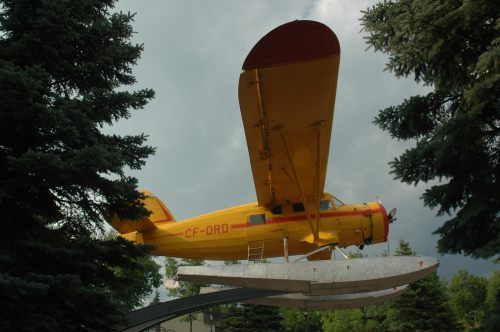 Red Lake’s work-a-day Chimo Air Norsemans CF-JIN and CF-KAO at the dock at Howey Bay. Then, a closer view of JIN and one of KAO offloading passengers after a sightseeing ride.

Chimo Air has been expanding. Added to the fleet recently is turbine-powered Otter C-FODG.

The Green family’s own Norseman CF-ZMX was one of the first bushplanes operated by Bearskin Airways. From humble beginnings, Bearskin today is one of the major airlines operating between Thunder Bay and Winnipeg, and many points north.

This important part of Northern Ontario is founded on gold mining, a story that dates to the Red Lake Gold Rush of 1925-26. It was the bushplane that opened up the area and allowed the whole Red Lake economy to develop. Here’s an aerial view in July of one of the great mines at Cochenour, a few minutes’ drive from Red Lake. 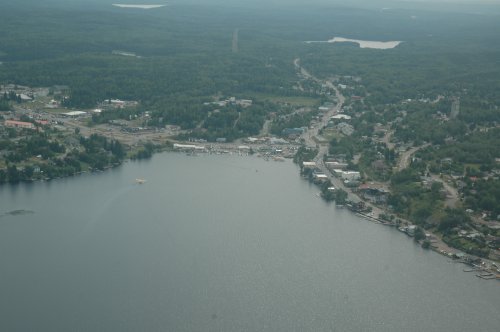 An aerial view of Red Lake taken this July of the head of Howey Bay, where the main bushplane docks are found. 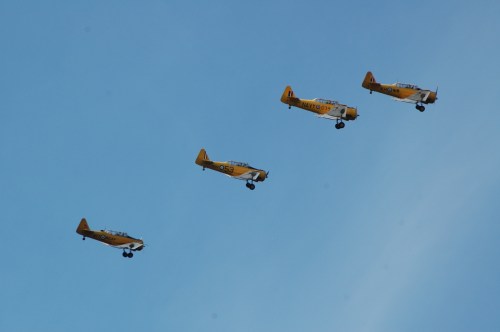 The CHAT Harvards arriving at Red Lake for the 2017 Norseman Festival. Then, views of the team performing over Howey Bay. 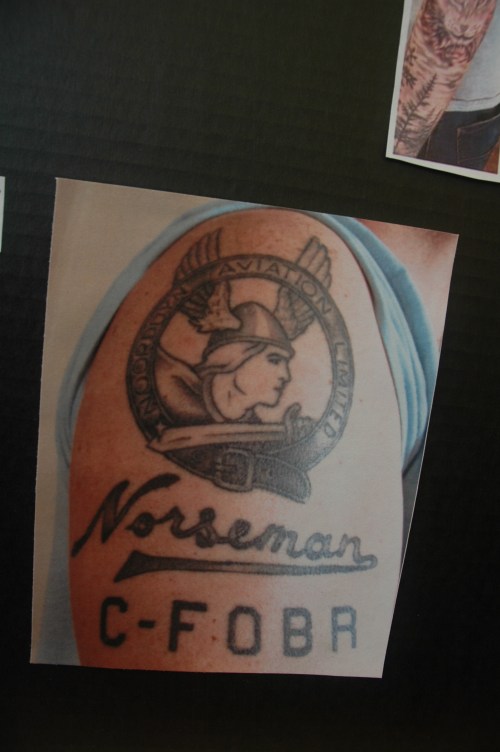 This year’s Norseman Festival even included a Norseman tattoo competition!

Sad to say, but just a couple of weeks after the Norseman Festival, a severe hail storm struck around Howey Bay. All four Norsemans were badly damaged. Retired Red Lake bush pilot, Joe Sinkowski, sent me this detail showing the serious damage to CF-DRD. Repairs are going to be costly and lengthy. 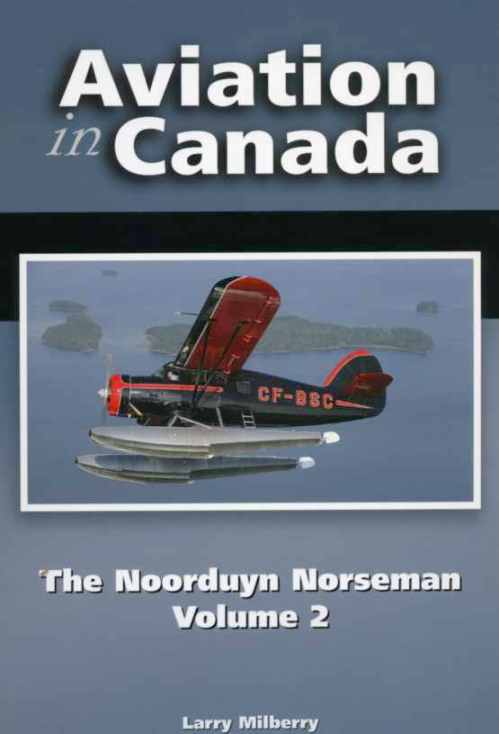 In case you still don’t yet have your 2-volume set of Norseman books, let me know at larry@canavbooks.com, and I’ll send you the info you need to place your order. This is one Canadian aviation history that you’ll happy to add to your library. It will give you decades of enjoyment.

Other very big Norseman news this summer comes from Robert St-Pierre, director of the absolutely amazing Montreal Aviation Museum: “Last Friday [September 1] with a little delay, our Norseman was finally delivered to us … All the parts are now stored in the 40’ trailer, the fuselage will be transferred inside in the west wing. Find in attachment a few pictures of the day and one showing it in its operational days in Ontario. Thank you to all the volunteers that were able to come in help for this very special day.”

This was a huge achievement in 2017 Norseman heritage. The plane is CF-GYY, which had been rusting away for years in Kuby’s airplane maintenance base and scrapyard in Kenora.

CF-GYY originally was a 1945 US Army UC-64. Delivered late in the war, it saw little service before being disposed of to a buyer in Michigan. In 1950 it joined Vancouver-based Queen Charlotte Airlines, then served various Northern Ontario operators from 1953. It ended in Kuby’s yard following a 1985 accident.

The MAM plans to restored CF-GYY to the specifications of the 1935 Norseman prototype CF-AYO.

Here are four photos from Robert St-Pierre showing the Norseman arriving at Ste-Anne de Bellevue, located a few miles west of Montreal. I like that great shot of the MAM volunteers doing the heavy lifting that day. The final shot (from the late Mike Ody’s collection) shows CF-GYY during its working days. 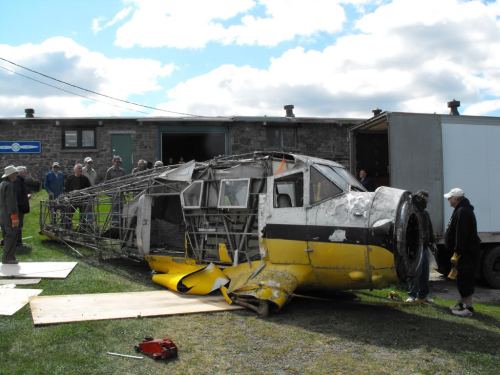