Roy Brown Out of the Shadows

Roy Brown as a sharp young airman of the First World War. In 2015 Roy was inducted into Canada’s Aviation Hall of Fame.

One of several prominent First World War aviators from Carleton Place, Ontario was Roy Brown. Trained to fly in 1915 at the Wright Brothers school in Dayton, Ohio, Brown went on to a stellar career as a Royal Naval Air Service fighter pilot and flying instructor. On April 21, 1918 he was on patrol over the front in his Sopwith Camel, when he and W.R. “Wop” May of Edmonton became entangled in a dogfight with Germany’s leading fighter ace, Baron Manfred von Richthofen – the “Red Baron”. Brown was credited that day with fatally shooting down von Richthofen. This later was challenged, some eventually concluding that Brown may have downed the great ace, but that it was just as likely that an Australian gunner in the trenches had fired the fatal round.

On April 21, 1918,  Baron Manfred von Richthofen, the most famous flying ace of World War I was shot down over France.  The stuff of legends, movies and songs, Germany’s von Richthofen, dubbed ‘The Red Baron’  became a national hero for his derring-do in the skies in  his distinctive red tri-plane.

This Saturday, April 21, one hundred years to the day of his death, the Great War Flying Museum just north of Brampton will honour the legacy of ‘The Red Baron’ by displaying its Fokker Dr.I, a reproduction of that famous aircraft.

The Great War Flying Museum is located at the Brampton-Caledon Airport. The  hangar and museum will be open 10:30 to 4:00 pm. Admission is by donation.

In the hangar, see the  reproduction of the Red Baron’s aircraft along with  other WWI aircraft.  Chat with the many volunteers who keep them flying. Then visit the museum, considered as having some of the finest displays of WWI memorabilia.

In just one month, starting on Saturday May 19, we will be open for the summer season 4 days a week.  Visit our website for further details:  www.greatwarflyingmuseum.org

A John Chalmers photo of the mural on Bridge Street in Carleton Place depicting the iconic dogfight involving Roy Brown, Wop May and Manfred von Richthofen. The scene is based on a painting by Stephen Quick of the Canadian War Museum. (To see a photo full size, just click on it.)

Many who fought in the air war were worn down physically and mentally by their brutal duties, Roy Brown included. Nonetheless, once home, he remained in aviation. He formed General Airways, which became one of Canada’s prominent early air services. Brown died at his farm in Stouffville, Ontario in 1944 at age 50. Sadly, for decades he remained almost forgotten, other than by those engaged in the “did he or didn’t he” controversy over who shot down the Red Baron. In his seminal 1954 book, Canada’s Flying Heritage, the great chronicler, Frank Ellis, didn’t even mention Brown.

The simple marker over the great Roy Brown’s “unknown” grave in the Necropolis. 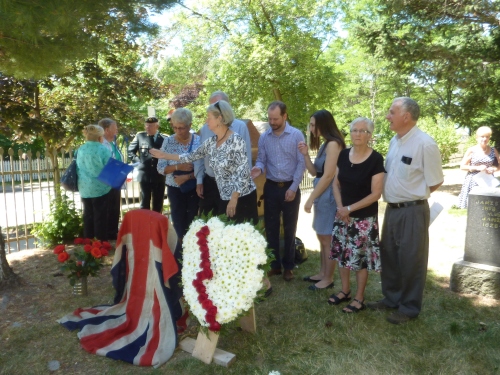 People gathering there on June 29 for the unveiling of Roy’s new stone, provided through the Last Post Fund.

For decades no one even knew where Roy Brown was buried, but this recently and happily has turned around. Roy today is a prominent “local hero” in Carleton Place, where the Roy Brown Society is dedicated to furthering his story. Also noteworthy is how in 2014 Nadine Carter of Stouffville took her own interest in Roy Brown. Then age 10, she did some diligent research that revealed how Brown’s resting place is in the Necropolis, a heritage cemetery in old Toronto. Through her good work, on June 30, 2016 members of the Brown family, Nadine and others from Stouffville, the Roy Brown Society, the Royal Canadian Legion, the Royal Canadian Military Institute and local history buffs gathered at the Necropolis for the unveiling of a headstone honouring Roy Brown, whose grave previously was marked only by a humble little stone reading “60A”. 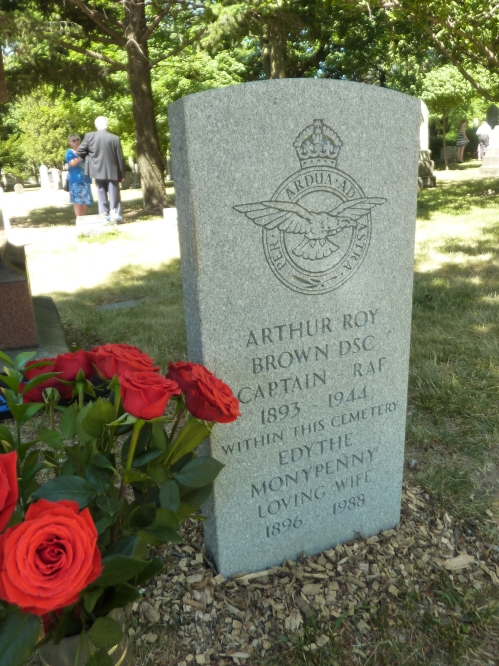 The newly dedicated Roy Brown grave marker in the Necropolis.

The famous seat from the Red Baron’s Fokker Triplane, which Roy Brown donated in 1920 to the RCMI.

A replica set of Roy Brown’s medals and the two volumes of Alan Bennett’s biography. On the left in the medal group is Roy’s Distinguished Service Cross and Bar.

Things snowball — another important event took place during Stouffville’s Strawberry Festival on this Canada Day weekend. The Roy Brown story was told through large banners and other displays, a historic plaque was unveiled and the Great War Flying Museum appeared overhead with several WWI replica fighters, including a “Red Baron” Fokker Triplane.

The crowd gathers for the Roy Brown festivities in Stouffville on Canada Day.

On the right, Nadine Carter chats with John Chalmers of Canada’s Aviation Hall of Fame.

Today much can be found online about Roy Brown. Be sure to check out John Chalmers’ coverage of the Necropolis event in Remembering Captain Arthur Roy Brown, published in the Stouffille Sun-Tribune. Also see this great article about Nadine, the Stouffville school girl, working to preserve Roy Brown’s memory.

For further important info visit the Roy Brown Society website. Wikipedia also has good material. The leading book in print is Alan Bennett’s 2-volume Captain Roy Brown (available through the Roy Brown Society). Other key books include The Red Baron’s Last Flight: A Mystery Investigated by Norman Franks and Alan Bennett. Additionally, material has appeared over the decades in such publications as Cross and Cockade and The Journal of the Canadian Aviation Historical Society. 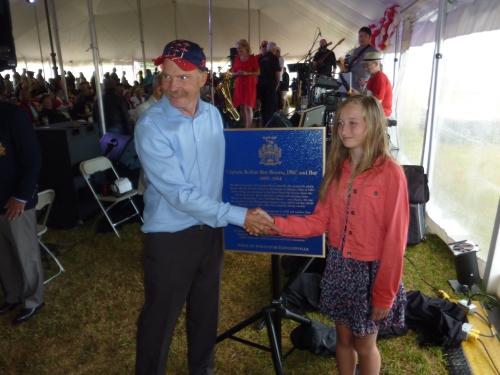 This entry was posted in WWI and tagged Roy Brown. Bookmark the permalink.