Evolution of an Aerospace Company History 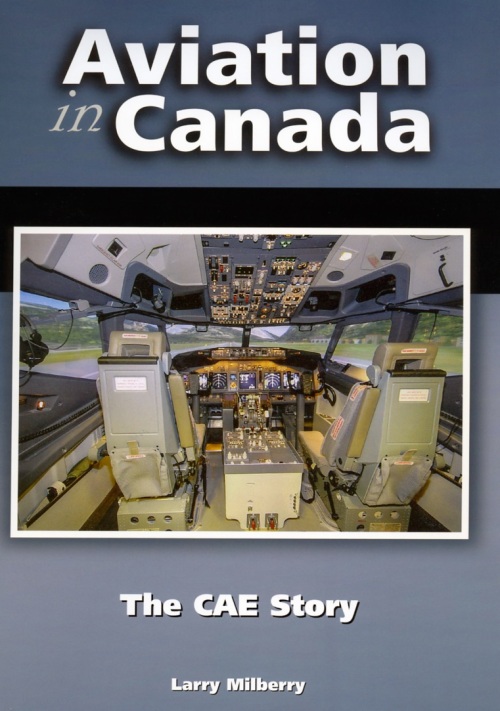 No sooner does any history get into print than the author starts hearing from the readership. Some have fresh material to contribute about some topic covered, others are pointing out the author’s sins of commission or of omission. All this is important stuff and provides an author with a close-in take on how a book is faring.

Over the decades the great Fred Hotson gathered tidbits and insights from his readers about his wonderful book, The De Havilland Canada Story. The book had its roots with Fred’s modestly-published 50th anniversary of DHC. Then, as the Dash 8 began taking shape at Downsview in the early 1980s, DHC president, John Sandford, asked Fred to expand on his “50th” effort. Late in 1981 I was brought into the picture as publisher. Mr. Sandford let us know that he needed the book for the Dash 8 rollout, so don’t even think of missing that deadline.

Working with Fred, editor and designer, Robin Brass, and such artists as Pete Mossman and Ron Lowry, I set my sights on the Dash 8 rollout. Somehow, it all panned out and The De Havilland Canada Story was delivered three days before the Dash 8 ceremony of April 19, 1983. 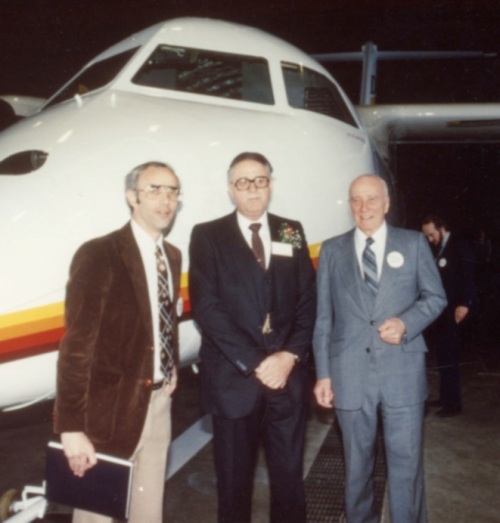 Publisher Milberry, DHC President Sandford and author Hotson at the Dash 8 rollout. The Dash 8 and the DHC book developed simultaneously and rolled out together on April 19, 1983. Plane and book are still going strong. New copies of the book now are available via Viking Aircraft in Sidney, BC.

No sooner was the book in print, than Fred was wanting to get our fast-selling first edition “cleaned up”. Our second edition included numerous tweaks, still more were added in a third. As the years passed, Fred faithfully kept on top of his story to the point that, in 1999, we ended with such a pile of DHC history updates, that not a fourth edition, but a whole new book came about, re-titled De Havilland in Canada. Since then, more than 15 further years have floated by, so yet another major makeover of Fred’s book beckons.

So it has happened with Aviation in Canada: The CAE Story. Launched last September 30, the book has panned out nicely so far. Major criticisms mainly are of perceived omissions – why not more details about this project or that, why so much about such and such, etc. Of course, that’s where subjectiveness arises – everyone’s a critic, right. Were ten authors to write ten histories of CAE, there would be ten completely good, but, different takes, yet all ten still wouldn’t satisfy some readers. However, it’s rare that even two takes are ever made about a company’s history. So … for now, Aviation in Canada: The CAE Story is “it”.

Among the many readers from whom I’ve heard since the CAE book appeared last September is Roy Lefebvre, a company retiree, who specialized in flight simulator evaluations and installations. Formerly an RCAF CF-100 pilot, Roy loved his time getting flight simulators to work at their best. He even was involved with Air New Zealand’s amazing DC-10 “terrain model board” flight simulation system. In the book I also describe one of Roy’s visits to TWA to evaluate and tweak its B.727 simulator. On p.213 is a beautifully staged photo by Pierre Giroux of this shiny new CAE “sim” with the cockpit crew looking sharp and ready to “fly”. But who was this crew? So far, no one could remember their names, not even the folks at the TWA museum in Kansas City, Missouri, whom I asked. Finally, however, we have cracked into this mystery with one name. 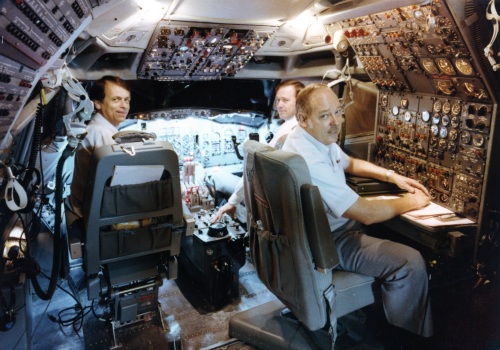 (Click to see the picture full screen.) The TWA crew on the flight deck of their new 727 full flight simulator at CAE in Montreal during the acceptance phase. Until now, we didn’t know the fellows’ names. (Pierre Giroux)

While leafing through “CAE” recently, I noted the picture at the bottom of page 213 and now recall the name of the pilot in the captain’s seat – it’s George André, whom I had gotten to know, when he was the TWA pilot in charge of CAE 727 sim procurement and acceptance.

I had been involved in the marketing process with TWA in Kansas City, and developed a great respect for George. He was a prince of a man, but you had to work hard to learn much about his background. I did learn that he had flown the SR-71 Blackbird, but George wasn’t revealing too many details back in those days.

So, today I did a google George, and what a resume! I found that in 2013 he published an amazing personal story, Wingspan – from J3 to Mach 3. In 2014 he had spoken to the Missouri Aviation Historical Society, which summarized his main accomplishments: “Over his impressive flying career, George has served as a USAF fighter pilot, Lockheed Martin test pilot flying (among other types) the SR-71 Blackbird out of Groom Lake, a longtime airline pilot for TWA, an airshow pilot, and the oldest Reno air-racer in show history — among many other achievements. The presentation was truly magnificent and shed light on some of the greatest milestones in American aviation from someone who flew them firsthand.”

As well as being the CAE pilot assigned to TWA’s 727 sim, I worked with marketing to help secure this contract, which was a first for the 727 from a mainline US air carrier. Among other “firsts”, with this project CAE introduced the popular Fortran computer language, which was considered a breakthrough. This led to some difficult times during in-plant acceptance, in that the less efficient (but user friendly) Fortran overloaded our computer, resulting in some apparent shortfalls, where I felt compelled to support George. This was the first time I felt the squeeze between us and the customer.

Last week, even more details about the photo and the TWA 727 “sim” emerged. Earlier I had tracked down George André and had a great chat with him. I ordered a copy of Wingspan, and George promised to add his own details about the p.213 photo. Here’s what George sent:

Hi Larry … The picture in question is not the one I envisioned.  I am in the left seat and my flight engineer, who was my assistant in the program, is Stacy Patterson. At the time, Stacy was the 727 flight engineer training manager, later to become the 727 pilot training manager. In the third seat is a TWA simulator engineer/technician whose first name I remember is Tom, but I forget the last. Being forty years ago, I have no idea who might be around to ask.

Regarding some stuff from the CAE book- I was tasked to be the project manager for the acquisition of two 727 advanced simulators for TWA purchase around 1976. The only viable contenders were Link, which had furnished all of our previous simulators, Redifon in England, and CAE.

Link obviously felt it had the job, hands down, and that was evident by the apparent lack of enthusiasm in pleasing us in order to win the contract. Redifon wanted badly to gain a foothold with a major US carrier, and bent over backwards. This, delightfully, included considerable wining and dining, hosting at the Paris Air Show and about anything else my team desired.

In the end, I believed CAE with a new DEC computer had the most promise for achieving the nirvana in simulation. Having a simulator so advanced that it would replace the entire flight envelope, meant, primarily, that it could be used for landings. CAE was most co-operative. Together we developed an advanced instructor station that greatly modernized the instructor tasks and capabilities.

After many months of construction and proving runs, and nearly full time residence in Montreal for me, we had our machine. The biggest glitch would turn out to be the new computer, which had a lot of growing pains. I would personally take a lot of heat for my CAE decision, putting faith in a new computer design, but, in the end it all worked out.

I spent many enjoyable work and social sessions with Byron Cavadias and David Tait, and regret not staying in touch with them. At that time I was involved with the restoration of my WWII Bücker Jungmann biplane. Byron informed me that the famed Adolf Galland, a senior Luftwaffe commander in WWII, was a CAE representative in Europe. Byron kindly informed the General of my plane and we received a nice letter from Herr Galland, saying that he had flown the plane and had good memories thereof. I still have that letter somewhere.

Some comments in the CAE book differ somewhat from my recollections, which could be erroneous on my part. You point out how United achieved first Phase III simulator approval in the early eighties with a CAE unit. This is what I remember. United did achieve the first approval of a simulator for the landing maneuver around 1979, but it was done with a Link unit with a staff of four 727 pilots and numerous (10, I heard) engineers from Link. We were trying to beat them to the punch. I was the only pilot on TWA’s effort and had the help of one CAE engineer. We did all of the tests and downloaded reams of data to prove the simulator replicated the aircraft with high fidelity.

I personally hand-carried several heavy boxes of evidence to FAA headquarters in Washington and presented our request for approval. It was given and we achieved the second landing approval behind United, sadly a few weeks later. To this day, it is one of my proudest professional achievements. Subsequently we were able to completely train a 727 pilot totally in a simulator, a feat unheard of in earlier times. Cheers … George