Fred von Veh chats at the book launch with C. Douglas Reekie, CAE’s longest-serving CEO (1967-85), who retired in 1995. Fred served many years with Stikeman-Elliot, the law firm which for decades had such a prominent influence on CAE’s affairs.

On September 30 CANAV Books officially launched Aviation in Canada: The CAE Story. We had the ideal venue — the Royal Canadian Military Institute on University Ave. in downtown Toronto. Gus Corujo, who is the ideal fellow to cover any such aviation event, took most of the photographs, which you can see on his blog gusair.com.

Chris Hadfield with RCMI President, Gil Taylor. It was great having Chris on hand, since he had pioneered with the CAE-developed “3 degrees of freedom” Canadarm hand controller used on the Shuttle and ISS. 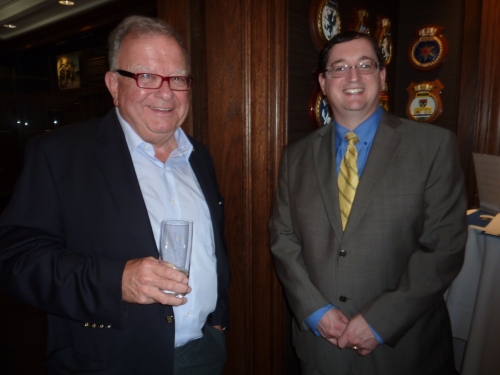 CANAV supporter Tom Appleton (left) had a long career at de Havilland Canada, where he influenced such key programs as the DHC-5 Buffalo (test and demo pilot, etc.). Tom later was vice-president at Bombardier’s amphibious division and in 2015 was Chairman of the Board at Canada’s Aviation Hall of Fame. With Tom is Dr. Richard Goette, who teaches history at Canadian Forces College and for years has been prominent in the Canadian Aviation Historical Society.

Key family members throwing in their support at the book launch: Milberrys Foster, Owen, Marin, Simon and Amanda with U of T staff alumnus Dr. (and Grampa) Jack Pitre in the red sweater. 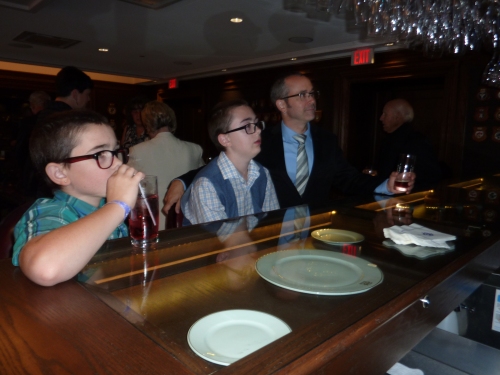 Then, Shannon, Owen and their dad, Simon, taking off a few minutes to catch up on the Blue Jays.

Publisher Milberry (right) with Trent Horne. Fred von Veh and Trent were the Bennett Jones lawyers who kept the publisher from self-destructing as the CAE project came down to the final stretch.

Early Reaction from Our Readers

There already have been many supportive comments about the CAE book (so far the nitpickers have been keeping a low profile):

Former CAE CEO C. Douglas Reekie observes: “I am impressed with what you have accomplished. You deserve a great deal of credit for undertaking this task and for doing it so well. There should be a medal for you for perseverance.”

Notes Fred Moore, the test pilot who, as a young man, helped CAE salvage the CF-100 flight simulator, when the project was on the brink of collapse, “What an impressive book full of historic detail and a wealth of photos. On top of that, it’s an easy, entertaining read.” Fred is a member of Canada’s Aviation Hall of Fame.

Long-serving CAE evaluation pilot, Roy Lefebvre, notes: “Thank you, Larry. I have received my CAE book and can only say that it surpasses my fondest expectations. The quality of the book is exceptional.”

Dave Tait, who joined CAE in 1958 and eventually was a senior vice-president, writes: “You are very well regarded by the Canadian Aerospace Industry, including by a large number of retired CAE employees and much of the present staff. I am pleased that you stayed with your project. Thank you for this valiant effort.”

Robert “Bob” Hodge submits a detailed, almost page-by-page review of the book, which brought back for him a tidal wave of memories. I’m hoping to hear similarly from others, so that small gaffs can be corrected and new history added for any future version of the book. In part, Bob writes: “To me, CAE was the most exciting and interesting place to work from 1965 to 2002. The variety of research and technological developments, plant expansions, etc., going on were seemly endless.”

Here are a few of Bob’s “Memory Lane” observations:

Page 27 … Eileen Jensen in the lower right photo  was the executive secretary to Robert Cooke. She also assisted the telephone operators in the days when you actually spoke to a real person when calling CAE.

Page 32  … In the Resolute Bay photo I see Ken Robinson (far right ). I drove him to and from work for 5 years.

Page 34 … My artwork- CAE plant (since this diagram includes the  first “Elephant House” plant addition, it’s not quite from 1954, but a few years later).

Page 37 … I set up this photo with the plant maintenance guys for our photographer, Ed Birmingham, for that year’s company Christmas card.

Page 82 … Robert Kemerer photo … I can’t thank him enough. I owe my CAE career to him.

Page 100 … Byron with my first simulator model based on the motion system built in our model shop by Ziggy Rheul, and Steve Bradford.

Page 109 … Frank Borlace was my manager in Technical Publications before I moved to marketing. Frank was a dear friend and an extremely wise mentor. We  spent many hours playing music on keyboards and synthesizers. I’m the good looking guy in the background.

Page 115 … The F.28 illustration was my rendering. I also created artwork for most of the plaques CAE required.

Page 125 … The two “unknown” fellows here are Brian Welsh (left) and (myself wearing the pink short and bell bottom pants).

Page 172 … I got to fly a mission on this Huey sim, but made a very hard landing.

Page 181 … I was one of the test subjects for Andy Lippay, while he was doing human engineering for the Canadarm controllers.

Page 182 … In this photo, Jim McLaughlin was a wonderful and powerful baritone. Any time he would break in song, everyone within earshot would stop and listen.

Page 183 … I not only got to meet the astronauts who visited CAE, but got to play with their toys. That’s me in the White Room photo.

Page 186 … This pilot “Morton” impressed me by flying the helicopter with the CAE 3-axis controller without having practiced before Pierre Giroux and I went to the NRC to record the historic moment.

Page 226 … CAE sports: I played fastball with Paul Hamilton, Don Amos and Barry Noonan the last 2 years we had a team in the Montreal Industrial Recreation Association. Later, we started a touch football league, but had to quit after 3 years due to injuries. CAE also had a couple of great bowling leagues under Frank Watts and Jim O’Donnel.

Page 254 … Pierre Giroux and I took these aerial photos from his Cessna with the doors removed and some creative co-operation from ATC at Dorval.

Page 267 … Almost froze to death in Chatham to get these pics with Pierre. The ADATS driver had to leave the hatch open because of exhaust fumes. Same page … the Emirates trainer artwork was done by Ed Tiger. In my books Edwas the most talented tech illustrator.

Page 272 … One long night to get this shot with no actual pilots. In fact, one of the stand-ins was my office clerk.

Page 292 … Aerial shot. Our oldest son, Bradley, worked for CAE for 7 years, including at the Bombardier Training Centre, performing updates and morning ready tests. Our daughter Tara was at CAE in the control systems sector. My wife, Gail, was in accounting before leaving to raise our children. So … CAE was really a family affair, as it was with so many other employees. CAE remains a great company and now it has a great and informative book to tell its story.

What Else Is Up So Far in October?

On October 5 I joined some of CAE’s people for an exclusive tour of the Vintage Wings collection at Gatineau airport near Ottawa. VW CEO, Peter Allen, was our guide, giving a running commentary about each of the aircraft from Tiger Moth to Swordfish, Lysander, Hurricane, Spitfire and Sabre. Later that day I spoke briefly to the CAE contingent, each of whom received a copy of the CAE book.

CAE people take a break during their meeting in the Vintage Wings library to flip through their copies of “The CAE Story”. 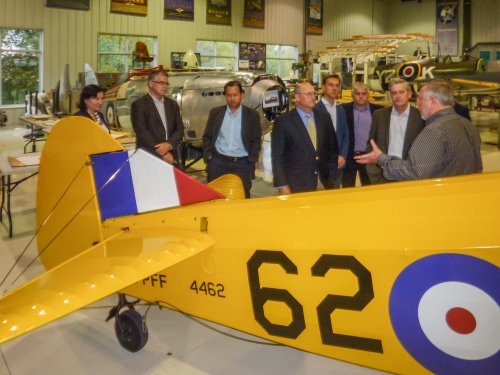 Peter Allen of Vintage Wings briefs some of his CAE guests about the museum’s WWII Fleet Finch trainer. 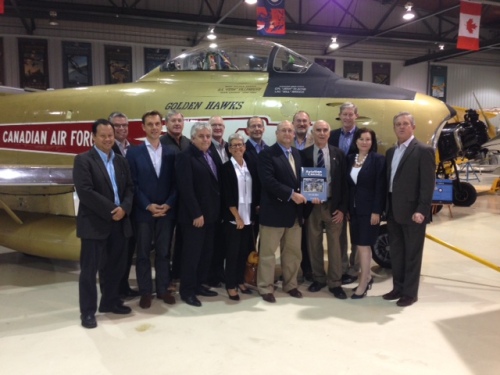 Peter’s guests with the airworthy Vintage Wings F-86 Sabre, which Chris Hadfield has been flying since 2008. (CAE Photo)

On the same trip, I met up with my old book publishing compatriot, John McQuarrie. As sometimes has happened over the decades, we each had a new title out at the same time, so we traded books in the bar in The Hilton Lac Leamy. John’s 2016 book will be a spectacular trans-Canada photographic cavalcade. See magiclightphoto.ca for info about John’s wonderful line of books.

Next morning Hugh Halliday picked me up for a drive into the Gatineau hinterland, mainly to spend a couple of hours at Kingsmere. This national heritage site is the legendary get-away that William Lyon Mackenzie King built for himself back in the early 1900s. Here is a view up to the great man’s abode. 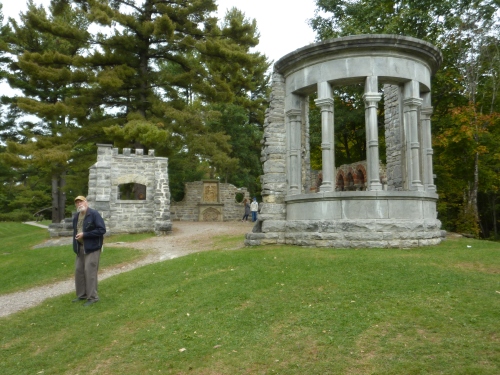 Hugh “among the ruins”, which King collected from demolition sites around Ottawa in the early 20th Century, then reconstituted in the Gatineau Hills.

One response to “CAE: “A great company & a family affair””