Howdy, CANAV bush flying fans! It’s time for a quick update about our Norseman book project (scroll back a bit to see the main briefing). By now nearly all the text is written and checked and 100s of photos are scanned and captioned. More than 250 pages (15 chapters) are already in galley (page spread) form, so that’s solid progress. I fear that the end product will reach nearly 400 pages (big enough for two “normal” books), but you readers will be in your glory, too engrossed to complain about the book being too heavy.

This can’t be a spring book at this point, but I’m trying to keep roughly on track for a mid-summer book launch. One reason for the slowdown is how so much original new material keeps arriving. I’m trying to squeeze all of it in somewhere.

In the early 1990s Joe McBryan of Buffalo Airways restored CF-SAN. Having begun with Saskatchewan Government Airways in 1946, “SAN” later served a long list of operators, until grounded by an accident at Fort Simpson in 1981. Years later Joe acquired the wreck, had it restored to perfection, then re-introduced it at the Norseman Festival in Red Lake in July 1995. Here it sits in Yellowknife the following month.

Meanwhile, if you are especially a Norseman fan, while you’re waiting, get yourself a copy of Air Transport in Canada (order here). To date no book includes so much Norseman history in text and photos. If you don’t have ATC, you will be doing yourself a favour — it’s the largest aviation history book in print — more than 1000 pages and around 4000 photos in 2 massive volumes. Only 300 hundred sets remain of the original 3800. Usually $155++, now $95 + $15 Canada Post + $5.50 tax = $115.50 (Canada only, US/overseas contact me about the cost of shipping).

Keep checking in for occasional Norseman book news. Thanks to all you great Norseman fans who have been helping so enthusiastically. Keep your stories and photos coming until I fire up a red flare! Cheers … Larry 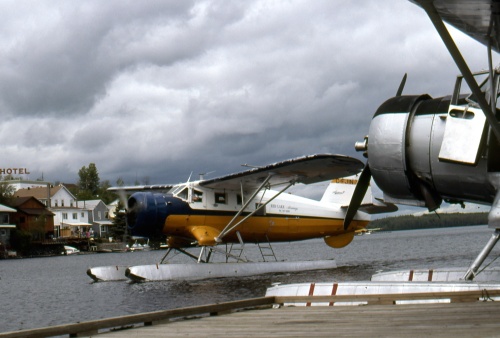 This entry was posted in Aviation in Canada, Bushplanes, New release, Norseman. Bookmark the permalink.