Aviation in Canada: Evolution of an Air Force: Launched and in Orbit! 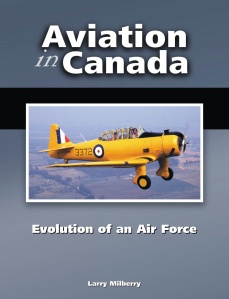 After dozens of book launches, such events sure can be predicable but, in CANAV’s experience, every one has turned out to be a blast. I sometimes am asked about book launches of yore, and those days sure race back to mind. The first was with McGraw Hill-Ryerson’s Aviation in Canada back in 1979. That one I held in the back yard at 51 Balsam, which then became the venue for several similar excellent thrashes — Sixty Years and Austin Airways are memorable.

The first all-CANAV event was held at Pete Mossman’s great uptown domicile in the summer of ’81. There we launched The Avro CF-100, for which Pete had done the fabulous artwork. November 2, 1982 came next — my first $3000 hotel splash, held at the Cambridge Inn out by what we used to call Malton Airport (today’s YYZ). The idea was to kick off The Canadair North Star, but the weather closed in — IFR all the way and I could foresee disaster. Astoundingly, things panned out beautifully. Piles of North Star fans from Canadair, TCA and RCAF times suddenly materialized. Through the efforts of Canadair exec Dick Richmond, the company Lear flew to Malton with several senior Canadair retirees, Dick included; other folks turned up wearing old time TCA stewardess and pilot outfits and, miracle of miracles, a good few North Star books were sold. 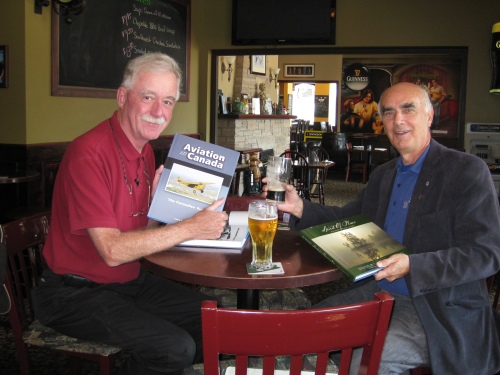 John McQuarrie and old team mate Larry Milberry have just exchanged their new books at The Brogue. John got his start in publishing after a conversation with Larry back around 1990. That day he showed out of the blue with a series of questions starting with, "I think I'd like to get into publishing. Where does a fellow start?" He began by producing some world-class Canadian military titles, branched off into a series on ranching, then got into cities, canals, etc.

A 1986 Ottawa launch for The Canadair Sabre brought out a fabulous crowd of Sabre pilots and groundcrew. Included were several who had fought in Sabres in Korea — Ernie Glover (3 MiG-15 kills), Andy Mackenzie, Omer Levesque (1st RCAF MiG-15 kill), Claude LaFrance, Eric Smith, Bruce Fleming. Talk about the cream of the crop. There also were Golden Hawks milling around and Vic Johnson screened a fine team video. It was either here or at our Ottawa launch for Sixty Years that the Soviet air attaché showed up — some former MiG-21 pilot who pretended not to speak English. A CanForces general in the crowd explained that such fellows attend any such Ottawa event just to check on who’s in town, in this way getting some “intel” to pad their reports back to Moscow! Sadly, no one seemed to be taking photos that night in Ottawa — I don’t have a one.

The De Havilland Canada Story was launched at the roll-out of the Dash 8 in 1983, Power: The Pratt & Whitney Canada Story at Hart House at the University of Toronto, and Canadair: The First 50 Years took flight at a glitzy affair down in old Montreal. That was an amazing one with hundreds of Canadair retirees and VIPs, including three CanForces generals. At each of these affairs, books were given out by the hundreds, so what a way to spread the good word at your clients’ expense!

Another zany book launch was for Typhoon and Tempest: The Canadian Story held at 410 Wing RCAFA at Rockcliffe (Ottawa). As Hugh Halliday and I were setting up in mid-afternoon, a blizzard descended. By the time we had been hoping to see a crowd, only a few old 410 regulars were on hand. They’d been sitting all afternoon at the bar, so weren’t much interested in books. Never mind, however, for people gradually started to filter in, storm or not. About 8 o’clock there was a clatter outside. I looked but could only see snow streaking by horizontally. Then, out of this cloud entered 438 Sqn Hon. Colonel Andy Lord, a former 438 Typhoon pilot. Andy had commandeered a 438 Kiowa helicopter to fly up weather-be-damned from St. Hubert. Naturally, he looked ready to party or take on the Hun, but not so his young pilots — they were white as sheets!

Book launch show-and-tell: John Hymers, Dennis, Rick, Kelly and Andrew look over a photo album put together by John showing WWII PR photos taken by Goodyear Rubber in Toronto. No one had seen these since the war. Happily, John had rescued the negs from the trash one day ... such amazing scenes as a Bolingbroke on show at the CNE. 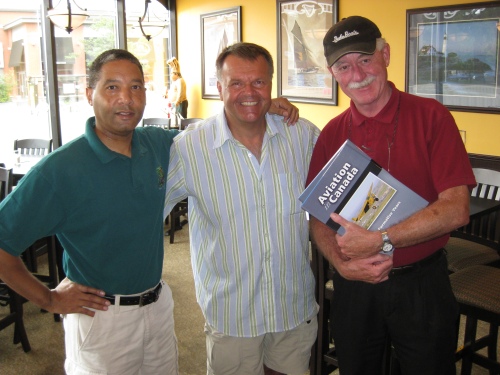 Tony (Aviation World), Rick and John looking to be in decent form.

So what happened on the book launch scene last week — August 19, 2010? It was as predicted — a super bunch of supporters, old friends, some of whom have been there for CANAV since Day 1. Renowned author Fred Hotson (age 95 or so) made it with  his chauffeur, Dave Clark, an old-time Canadair type. A few other vintage CAHS members turned up — Bill Wheeler, Shel Benner, Pete Mossman, Gord McNulty, etc. Rae Simpson, with whom I used to photograph planes in boyhood days, showed, fresh in on a King Air flight from The Soo. Photographer-publisher John McQuarrie blew in from an assignment in Kingston, showing off the glitziest book of the day — his magnificent new “Spirit of Place” title — Muskoka: Then and Now. Ace photographer Rick Radell and Aviation World stalwarts Tony Cassanova and Andy Cline showed with all their great support — lugging boxes and such. Two other fine party guys on the scene? AC 767 and CWH Canso driver John McClenaghan and geologist George Werniuk. John Timmins, of Timmins Aviation fame, was taking in his first CANAV event. Milberrys Matt and Simon/Amanda (plus wee ones) arrived as per usual. 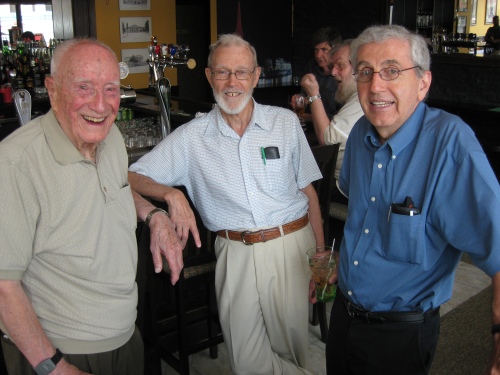 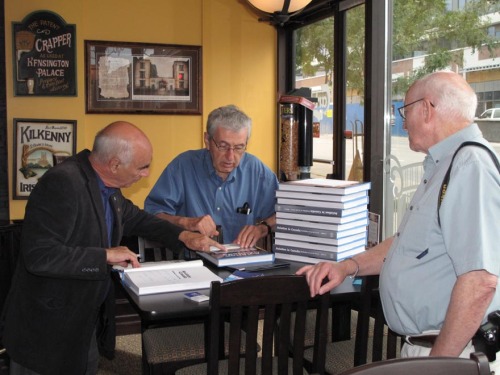 Larry makes a sale to Gord as ex-RCAF radar tech and military policemen Al Gay watches. Al and some friends have been developing a flight simulator series based on all 100+ aerodromes of the British Commonwealth Air Training Plan. (Tony Cassanova) 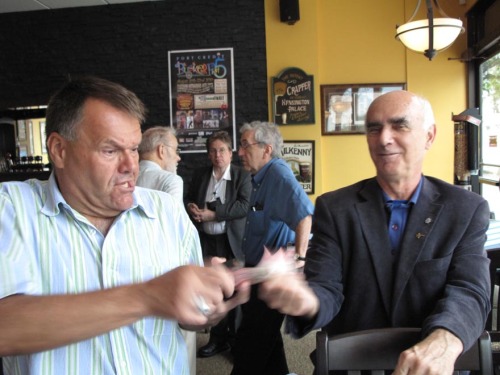 Rick wants a book but is having trouble letting go of his $50 bill. The aviation gang ... what a bunch, eh! This joke is no laughing matter to anyone publishing aviation books: "Question: Who invented the world's thinnest copper wire? Answer: Two airline pilots fighting over a penny!" Sad to say, but this seems to be true. As a group, airline pilots religiously avoid CANAV book launchings. (Tony Cassanova)

Wartime-wise? Well, due to time doing what it does so efficiently, there were few on hand from 39-45 times. John Coleman (Lancaster pilot 405 and 433) and Jack McCreight (Lancaster nav) were the sole RCAF reps, whereas in days gone by dozens of such super Canadians used to show. Fred Hotson of Ferry Command was the Methuselah of the wartime bunch on this day. Other friendly folks came and went as the afternoon passed — just A-1 all the way. 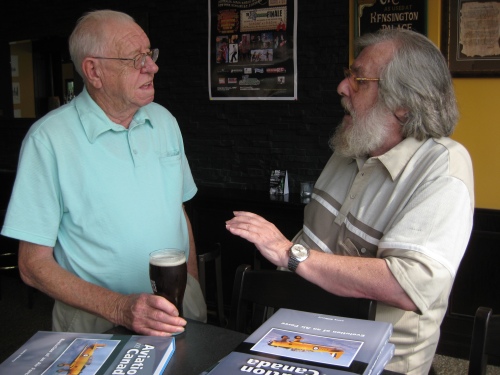 Rae Simpson and Jack McCreight had lots to talk over through the afternoon. Rae flew CF-104s during the RCAF's NATO heyday in the mid-1960s, then rose to be the CanForces chief test pilot. Jack's wartime training story is told in our new book.

The staff at The Brogue in Port Credit supplied the yummy food and whatever liquid refreshments we needed, so the whole effort came off as finely as a publisher could wish. Toronto’s summer nightmare traffic scenario sure tried to put the kibosh on things, but CANAV’s “solid citizens” toughed it out, battling off the worst that the QEW and 427 threw at them. Thanks to everyone for making it all another gem of a day — Book No.31, if my count is on. Cheers … Larry 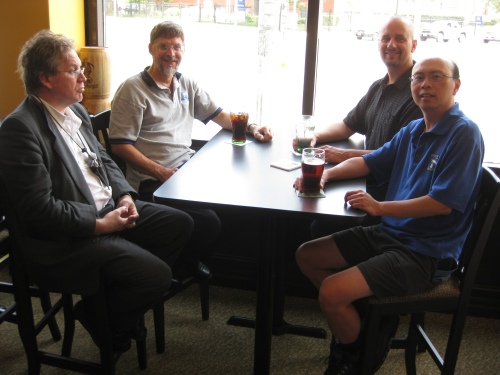 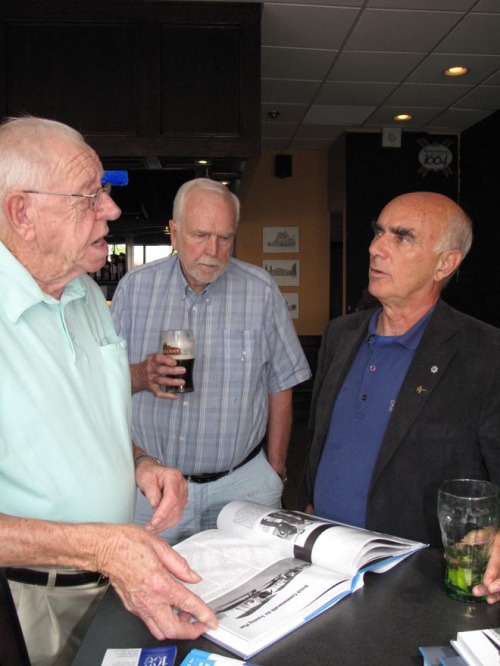 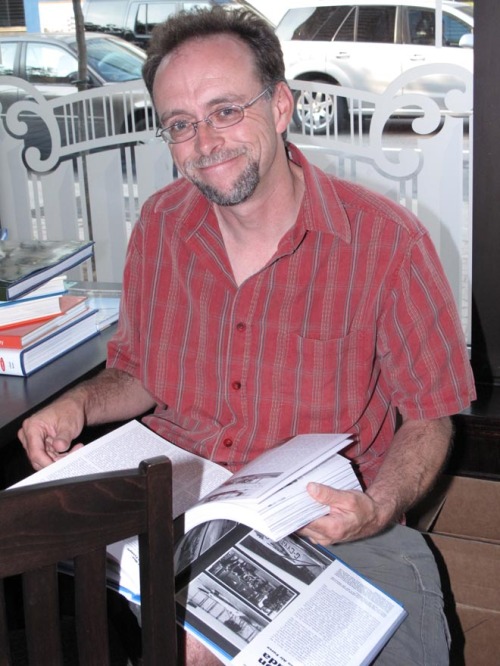 While we were partying at The Brogue, Andy Cline was sweating it out at Aviation World, but after work he joined us anyway. If you haven't yet visited Aviation World on Carlingview Dr. near YYZ, in Richmond, BC near YVR, or in Chicago near Midway MDW, make a point of it. (Tony Cassanova)

3 responses to “Aviation in Canada: Evolution of an Air Force: Launched and in Orbit!”