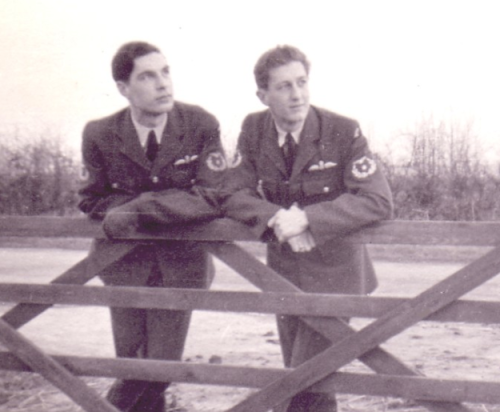 Douglas Kinch (left) with his good friend, Johnny Rivett, when they were young pilots at RAF Cottesmore awaiting their postings. Johnny died in the 1959 crash of CF-100 18417 near Prestwick. (via Douglas Kinch)

As a follow-up to my original blog post (below) about the loss of CF-100 18417, in April 2012 Douglas Kinch wrote from the UK about his friend, Johnny Rivett, who was killed in this incident. Douglas’ letter adds to the human side of this important bit of CF-100 and Prestwick history:

Hi Larry … Johnny Rivett and I joined the RAF in 1946.  We first met at RAF Church Lawford, Warwickshire, England where we conducted our initial flying training on D.H.82A Tiger Moths and studied all the associated ground subjects with No.2 FTS.  April 1948 No.2FTS moved to RAF South Cerney, a small grass aerodrome near Cirencester, Gloucestershire, a place steeped in Roman history.  It was here that we completed our flying training on the North American Harvard, then the standard RAF advanced trainer. We were awarded our “wings” on a very cold day in December,1948.

After a spell of leave John and I were posted to No.201 AFS, RAF Swinderby, where we converted to the Wellington Mk 10, completing 55 hours of intensive training. Unfortunately, Johnny had  quite a bad crash one night in April 1949, when his Wellington failed to get airborne off a short runway, ending up a few yards away from a petrol station on the Foss Way. Luckily, neither Johnny nor his two crew members suffered any injuries, although the aircraft was a write-off.

After Swinderby we went our separate ways, myself to Lancasters and subsequently Sunderlands (and the Korean War), and Johnny to Transport Command.  After a tour on transport aircraft (Yorks?) Johnny realised his dream — he trained on Vampires and was posted to 2nd TAF, RAF West Germany, where his good looks and charming personality were undoubtedly appreciated by the frauleins! His Station Commander was none other than the late Group Captain “Johnny” Johnson, the top scoring Allied fighter pilot of World War 2. Although we wrote occasional letters, I did not see Johnny again until 1953 when he, myself, my wife and brother spent an enjoyable day picnicking in the Kentish countryside and, in the evening, taking in a show at the London Palladium.

I never saw Johnny again.  I knew he had left the RAF and joined a Scottish airline. I was horrified to read of his death in 1959, when he was hitching a ride from Prestwick to Renfrew in an RCAF CF-100.  I believe he was in the rear seat with a suitcase on his knees when the aircraft went out of control immediately after take-off and the pilot had no option but to eject. A very sad end to a fine aviator and close friend.

Confirming exact details is the job and delight of the “history detective”. The process sometimes is a breeze, but can be the opposite, involving diverse sources and a veritable team. Here is a recent case where one seemingly small detail affected an important case. On March 23, 2010 John Stuart of Ottawa asked Vic Johnson of Air Force Magazine what information he might have about the crash of CF-100 18417 near Prestwick, Scotland, on January 22, 1959.

John’s interest arose professionally, as he was researching for the Seventh Book of Remembrance on behalf of Veterans Affairs Canada. By this time he had confirmed the names of some 600 Canadians who should be — but were not yet — on the list of Canadian military personnel killed since October 1947, while in service to Canada. John still had 19 names to confirm, including one of those aboard 18417. The VAC web site describes the importance of its project:

“The Seventh Book of Remembrance is unique because it is a living document that will be used to commemorate those who have given their lives In the Service of Canada for generations to come.”

Canadians are encouraged to continue contributing to the Seventh Book and the Canadian Virtual War Memorial.

“For information on how to submit an individual’s name for the Seventh Book, please visit the “Continuing to Build the Seventh Book of Remembrance” section of our Frequently Asked Questions. Families of deceased Canadian Forces members – and members of the Canadian public – can search the Canadian Virtual War Memorial for those commemorated in the Seventh Book.”

As to CF-100 18417, Vic referred John to me, as there was an entry in my 1981 book The Avro CF-100 regarding the crash. The crew is identified as Hancock and Rivett. The latter is noted as killed, so John needed to know if he qualified to be mentioned in Canada’s Seventh Book of Remembrance.

My skimpy information had been gleaned circa 1980 from an RCAF accident investigation card. Otherwise, I had nothing directly to offer. None of my RCAF contacts in the CF-100 world recalled this crew, and few even remembered the crash, since it had not been a squadron incident. To help John with his quest, I referred him to Douglas Rough who, along with some fellow enthusiasts, currently is researching the history of aviation in and around Glasgow. John explained his project to Douglas, noting:

“During the period Feb 1957 until Dec 1962, the RCAF deployed four CF-100 squadrons to 1 Air Division, RCAF with one squadron assigned to each of the Division’s four wings. Normal practice at that time was to route the aircraft over the Atlantic with a stop at Prestwick prior to the final leg to the selected destination in France or Germany. Scottish Aviation would have been involved in servicing the aircraft as required at Prestwick and I believe that Scottish also had a depot level overhaul contract with the RCAF during that period for the CF-100s. I suppose that Rivett could have been a pilot in the employ of Scottish Aviation, but I have no way of knowing and that is why I am seeking your assistance.”

Douglas enlisted the help of Gordon Macadie, a senior member of the Prestwick Airport Spotters Club, an association formed in the 1950s by local aviation fans. Members turn out regularly to their club house at Prestwick. They spot and record (for hobby purposes) the comings and goings of aircraft at Prestwick and neighbouring airports. Over the decades, the information which they gathered often turned out to be valuable for researchers and authors (I came to admire their efforts, when researching for The Wilf White Propliner Collection). Gordon consulted with another local aviation history aficionado, Tom MacFadyen, and they soon had the story shaping up. Gordon wrote back to John on March 30:

“I have been asked by Douglas Rough to assist with your query re: the above crash. I am aware of the incident, but have no photographs of the crash site. I have been down to the local library today and read the newspaper article of the incident. It states that approximately 20 seconds after takeoff  the aircraft crashed at Hobsland Farm, Monkton (the village adjacent to Prestwick Airport).

“The pilot, Mr. A.N. Hancock, ejected safely, but Capt. J.H. Rivett died in the crash. The canopy of the a/c landed on the roof of Monkton school. It states that Mr. Hancock lived in Glasgow and Capt. Rivett lived in Paisley just outside Glasgow. From memory Capt. Rivett was being given a lift to Renfrew. I seem to remember that there was a special procedure for the back seater to perform before ejecting, and that may not have been carried out.

“Was Capt Rivett a CF-100 Pilot / Nav. I am sorry — the information I have is sparse. I have contacted some friends on the subject, but can’t find any who were working on the RCAF overhaul facility at the time, however, I will keep asking. It is likely that Mr. Hancock was employed by Scottish Aviation at Renfrew.”

Fred Aldworth of Air Force Magazine in Ottawa was following up on the information provided by Douglas, Gordon and Tom, and digging further. One discovery was that the DND Directorate of Flight Safety in Ottawa seemed to have zero information about this crash. Two stalwarts at Library and Archives Canada — Tim Dubé and Paul Marsden — now got on the file. Paul located an accident report and informed Tim that “the two occupants of the plane were both civilians working for Scottish Aviation Co., carrying out a short ferry flight from Prestwick to Renfrew. Pilot was N. Hancock and in the back seat was J.H. Revitt.” Tim then took a detailed look and reported to Fred on April 1:

“On 22 January 1959, CF100 18417 took off from Prestwick for a ferry flight to Renfrew. Immediately after takeoff, the aircraft went into an uncontrolled steep right turn. Pilot Neil Hancock ejected safely. Passenger John H. Rivett failed to eject and was killed in the crash. According to the file, both Hancock and Rivett were civilian pilots with Scottish Aviation. John H. Rivett (also spelled Revitt in various documents) was a 30-year old RAF-trained jet pilot current on Sabres. As Rivett was a civilian working for Scottish Aviation, with no apparent Canadian connection, he is presumably outside the boundaries of the Books of Remembrance.”

All such findings were being relayed to John who, on April 2, was able to report to one and all:

“This is the complete story on John H. Rivett’s crash. It is ironic that I have a … a summary done by the Canadian Forces Directorate of Flight Safety on every Air Force crash since 1 October 1947 and the crash of CF-100 18417 is not listed. However, it appears that DFS had a file on the crash all along and did not list it since there were no Canadian fatalities or injuries. Perhaps this information will be useful to you. Thanks very much for your interest in my project; it is much appreciated.”